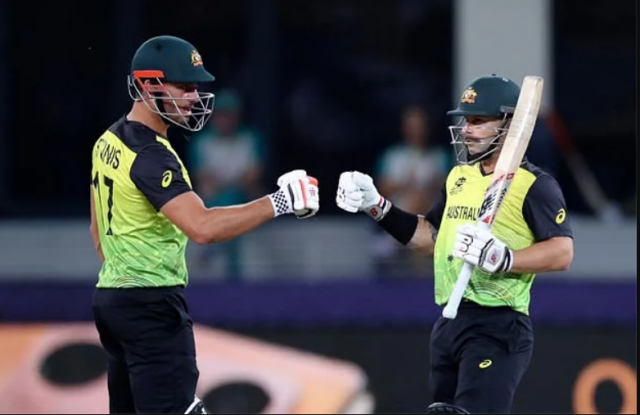 Australia beat Pakistan by five wickets to eliminate the side and make it to their second ICC T20 World Cup final. They will face New Zealand in the final in Dubai on Sunday, November 14. The Men in Green headed into the final undefeated and lost in the semi-final to make an exit from the tournament.

Asked to bat first Pakistan posted 176/4 with fifties from Mohammad Rizwan (67) and Fakhar Zaman (55). Babar Azam the skipper scored 39 crucial runs opening the batting. The Australian bowlers were expensive with the ball and were greeted by some brutal hitting from Zaman in the final overs. Josh Hazlewood went for 49 as Mitchell Starc and Pat Cummins gave away more than 30 runs.

It was an emphatic chase by the Australians with Matthew Wade playing a cameo of 17-ball 41. With Marcus Stoinis (40), the duo added an unbeaten 81-run stand to take Australia over the line. Wase hit three back-to-back sixes in the 19th over after Hasan Ali dropped him in the third ball of the over.

Before Warner shepherd the innings, the Aussies were reeling from 1 for 1 to 77 for 3 in the ninth over.

A massive wicket for Pakistan 🔥

This was the second time that an Australian side made it to the T20 World Cup final by beating Pakistan. They previously did the same back in 2010 when they played the final against England. Wade for his cameo was awarded the Man of the Match.

Matthew Wade Wins It For Australia 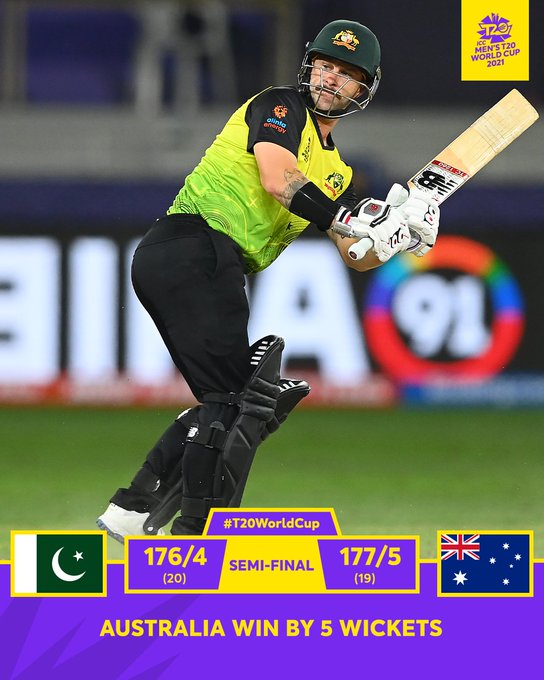 Twitter, meanwhile, enjoyed an Australian win as the game provided an entertaining finish. Reactions came pouring in with good wishes for the side in the final.

What an incredible semifinal. Well played ⁦@cricketcomau⁩ that drop by Hassan Ali was the game changer. Well played to Pakistan and feel for Afridi. My take. pic.twitter.com/qqwbahU2b3

Wow,Mathew Wade! Who would have imagined a finish like that! Hitting of the very highest order!

Wadey!! AUSTRALIA!! Through to the final! Winning by five wickets! Wah wah! No words. Brilliant boys brilliant! What a match!!! 🔥 #AUSvPAK #T20WorldCup

HOW CAN YOU NOT LOVE CRICKET!

Earlier in the game, David Warner scored 49 at the top and decided to walk on an appeal by Shadab Khan. The replays showed that he did not edge the ball. It was one of the turning points in the game.

Before Warner shepherd the innings, the Aussies were reeling from 1 for 1 to 77 for 3 in the ninth over.

This was the second time that an Australian side made it to the T20 World Cup final by beating Pakistan. They previously did the same back in 2010 when they played the final against England. Wade for his cameo was awarded the Man of the Match.

“There was one short side and I was confident that if I had to target that then I could pull it off, but it got down to two-a-ball and you had to hit everything in your arc. I got a boundary away early on and then stalled for 5-6 balls, but Marcus got the boundary away and got us to a total where I was confident in the last two overs. It hasn’t sunk in but probably when I sit down tonight it might sink in. I was out of the two team for 2-3 years, just came back 20 games ago and happy to have repaid the faith” said Wade after his cameo against Pakistan.