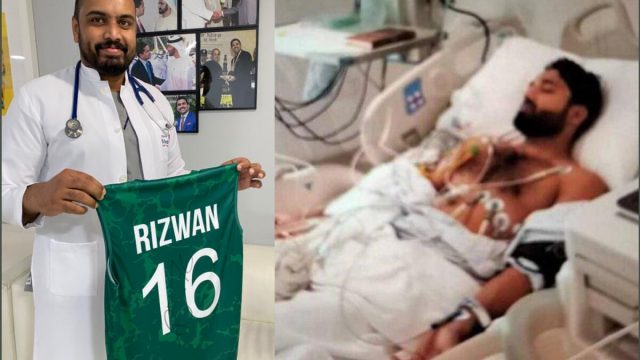 Pakistan batsman Mohammad Rizwan who was suffering from chest pain tremendous difficulty in breathing before the Semi-final clash against Australia had spent two nights in the ICU before the match of the ongoing ICC T20 World Cup 2021.

Mohammad Rizwan gifted his jersey Dr. Saheer Sainalabdeen, a specialist pulmonologist at Medeor Hospital in Dubai was treated Rizwan before the semi-final and took all the responsibility to make him fit.

“Mujhe Khelna he. Team ke saath rehna he, (I want to play and be with the team),” Rizwan told the doctors who treated him in the ICU as reported by PTI.

The Pakistani batsman was reportedly bought to the hospital late on 9 November. He was suffering from chest pain and was having difficulty in breathing normally. The doctor, who treated Mohammad Rizwan was surprised to see the rate at which the cricketer recovered.

“Rizwan had a strong desire to play for his nation in the crucial knockout match. He was strong, determined, and confident. I am astonished at the pace he had recovered.”

Mohammad Rizwan was even keen on getting fit, and back on the field so he can be part of the semi-final against Australia. The doctors were very surprised to see how determined Rizwan was to play the semifinal and perform for the team.

In that regard, the doctor said:

“Rizwan had a severe infection. Recovery and gaining fitness before the semifinal seemed unrealistic. It would have normally taken 5-7 days for anybody to recover,”

Despite being in the ICU prior to the match for two nights, Rizwan didn’t let it affect his game at all. He continued his form from the previous matches and scored 67 runs valuable runs for the team against Australia.

“Rizwan was firm, courageous, and confident. His physical fitness and endurance level as a sportsman had been key in his recovery. He had been in the ICU for 35 hours” said the doctor.