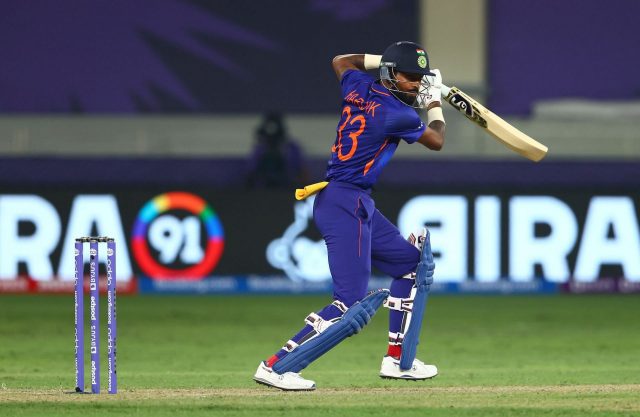 India’s match against last night was the first win for the Men in blue in this ICC T20 World cup 2021. However, Virat Kohli lost the toss again and put into bat first India managed a total of 210 runs in their 20 overs. Openers Rohit Sharma and KL Rahul had a healthy partnership of 140 runs. Rishabh Pant had come in Number 3 and Hardik at 4, both of them played a good cameo to help reach India till 210. 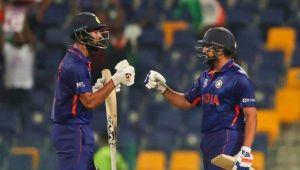 Hardik Pandya hit the ball high up in the air which went to the mid-off region where skipper Mohammad Nabi was fielding. The catch was dropped but sensing an opportunity to run the second, Hardik returned back to complete two runs for his side. However, he had to hurry to save his wicket.

In a rush of making it to the batting end, Hardik could not spot that Afghanistan wicketkeeper Mohammad Shahzad was standing and both of them collided.

However, the collision didn’t turn into a serious injury. Hardik Pandya kept on batting after that collision, and he scored an unbeaten 35 off just 13 balls to help India reach the total of 210.

“Return Of Ravichandran Ashwin Was The Biggest Positive” – Virat Kohli

One of the Best Career stats by a Spinner in T20 Internationals. – Ravi Ashwin is Amazing in T20I. pic.twitter.com/5LGrV2HOuY

Ravichandran Ashwin who made a comeback in the shortest format of the game in this T20 World cup was the biggest positive for team India said Virat Kohli the Indian skipper.

“The return of Ash was the biggest positive, it was something he has worked really hard for. He (Ashwin) showed this control and rhythm in the IPL as well. He’s a wicket-taker and a smart bowler as well.”

“We spoke in the team meeting that we have to focus on the small chance we have (to qualify) and stay positive and hunt that chance down. We don’t decide we’re going all out. Back the guys because they’re so skilful, and sometimes it comes off like today. To give credit to the opposition, they bowled really well in the first two matches and didn’t let us get away.”