Team India captain Virat Kohli has asserted that they will have to be at their level best to be victorious against arch-rivals Pakistan in the ICC T20 World Cup on Sunday in Dubai.

Although the Men in Blue have a 100% win record against Pakistan in World Cups, Sunday’s encounter will be a new challenge for Kohli & his men. The Indian captain said that his team is not taking Babar Azam and Co. lightly.

It's here.#India and #Pakistan against each other in #T20WorldCup action tonight in Dubai! pic.twitter.com/maUPE29Amm

Addressing a press conference on the eve of the game, Virat Kohli said:

“Pakistan are strong, you have to play your best cricket against them every time. They have players who are game-changers. We definitely have to bring our A-game against Pakistan.”

Pakistan has been a consistent side in the shortest format, especially in the UAE. They have not lost any of their last 11 T20I matches in the UAE. They also have 15 victories under their belt in Dubai alone from 25 matches.

“Hardik [Pandya] is getting better with his physical condition” – Virat Kohli 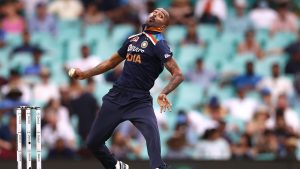 Virat Kohli has stated that Hardik Pandya is getting better with each day and is likely to resume bowling soon. Pandya has hardly bowled since his lower back injury in 2019.

“Well, I honestly feel that Hardik Pandya presently with his physical condition is getting better in terms of being prepared to bowl at least two overs for us at a certain stage in this tournament and we strongly believe we can make the most of the opportunity we have at our hand till the time he starts bowling. We have considered a couple of other options to chip in with overs so we are not bothered about that all.”

India will look to sneak in some overs from the likes of Rohit Sharma and Virat Kohli if the need for a sixth bowler arises. For the unknown, Kohli rolled his arms in the last warm-up game against Australia and shelled 12 runs from his two overs.