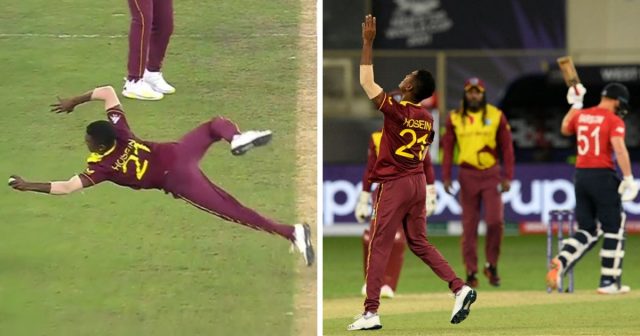 The big teams have begun their T20 World Cup 2021 campaign in UAE, with the first two matches of Super 12 happening on Saturday. All the batsmen had a difficult outing on challenging wickets but something that stood out was the incredible fielding display by players. Akeal Hosein took a stunning catch off his own bowling to dismiss England’s Liam Livingstone in the second match of the ICC T20 World Cup.

It is often said that taking a catch off your own bowling is one of the most difficult arts in the game of cricket since there is very less reaction time.

However, Akeal Hosein defied all the logic against England. As Liam Livingstone was deceived with the ball spinning away from him, he edged the ball which went towards the left of the bowler. He leapt across and snag the ball one-handed to his left to complete the catch.

Earlier, West Indies managed just 55 in their first match of the ICC T20 World Cup. With Alid Rashid bowling exceptionally well conceding just 2 runs in his 2.2 overs and picking up 4 wickets including explosive batters like Andre Russell and Kiron Pollard.

Chris Gayle was the highest scorer for his team, who accumulated 13 runs. Adil Rashid was the pick of the bowlers and dismissed four batters from just 2.2 overs. All-rounder Moeen Ali and Tymal Mills took two wickets each in their bowling spells against the defending champions.

An excellent bowling performance helps England get off to a flyer in their #T20WorldCup 2021 campaign 🙌#ENGvWI | https://t.co/bO59jyDrzE pic.twitter.com/5VaR7YL1uZ

England won the match comfortably chasing down 55 runs in just 8.2 overs losing 4 wickets. West Indies looked total out of form today, as they were not able to put enough runs on the board. It is an area of concern for the Men in Marron and will be interesting to see how they go with their batting in their next fixture against South Africa at the Dubai International Stadium.