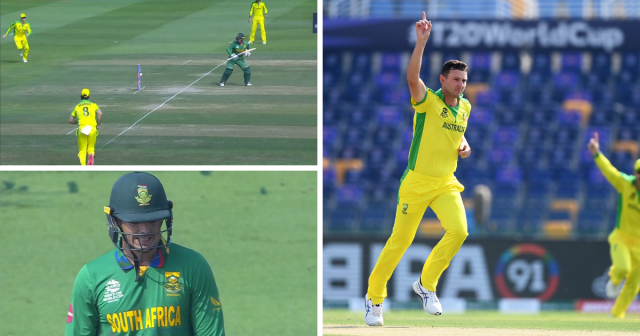 South Africa’s wicket-keeper batsman Quinton de Kock got out in the most strange manner possible in the Super 12 game against Australia in Abu Dhabi. Asked to bat first, the Proteas are under all sorts of trouble losing three wickets within the powerplay.

The incident took place in the first ball of the fifth over as Quinton de Kock tried a cheeky paddle against short delivery from Josh Hazlewood. He shuffled across the off-stump and missed the shot. The ball lobbed off the body, looped into the air and then bounced right onto the stumps.

Perhaps, Quinton de Kock lost sight of the ball and could only watch it helplessly fall onto the stumps. That was a very awkward dismissal for the South Africa opener.

Previously, South Africa captain Temba Bavuma got his side off to a flying start with two boundaries off Mitchell Starc in the first over. But Aaron Finch introduced spin soon after and Glenn Maxwell made an immediate impact removing the Proteas captain.

Josh Hazlewood also chipped in with a wicket dismissing the in-form Rassie van der Dussen to have South Africa at 16/2 before Quinton de Kock also followed the suit.

Speaking at the toss, South Africa asserted that they have a good side and are confident to do well in the T20 World Cup. He said:

“Our preparations have been good, have played a lot together. We are coming off with some real momentum, not worried about any favourites tag, but we have to stay true to expectations – we have confidence in our team and we’ll look to do well.”