After Pakistan’s Victory over India for the first time in a World cup game, There is still a huge banter going on between both nations over the Social Media Platforms. Pakistan defeated India by 10 wickets after their opening duo of Babar Azam and Mohammad Rizwan batted exceptionally well with the assistance of the pitch and ground conditions going in their favour. 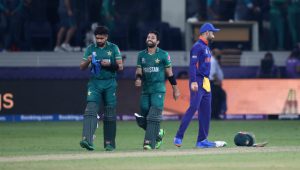 However, a video that is going viral on social media as we talk, a video of an Indian fan is being seen saying it’s a win for Cricket and not any team. In the short video, the person behind the camera asked the Indian fan, after India lost to Pakistan by 10 wickets, why he was smiling.

The fan replied back, “Kyun nahi muskuraye? Hum nahi muskurayenge toh kaun muskurayega?” (“Why shouldn’t I smile? If we don’t smile, who will?”) When further questioned on how he could be happy despite India losing by 10 wickets, he replied that “it’s just a game“. Moreover, he appreciated Pakistan and their cricket team for showing stand out performances on this big occasion. He also, congratulated the Pakistani fans back home waiting for this day for more than 3 decades.

While this was uploaded on Facebook, many uses showed humbleness appreciating the Indian fan for his decent and honest comments for the game, saying “Great we should know that it is just a game”.

Some of the other Fackbook uses commented: “On that day cricket win” and many called him a true Cricket fan.

Pakistan have had the best start to their T20 World Cup campaign. They beat arch-rivals India by ten wickets with Pakistan Skipper Babar Azam and his opening partner Mohammad Rizwan both scoring unbeaten half-centuries and taking their side home.