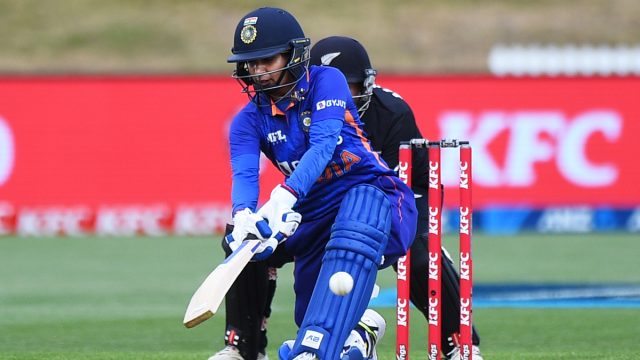 Team India suffered their first defeat of the ICC Women’s World Cup 2022 on Thursday. They lost to New Zealand by 62 runs, at the Seddon Park in Hamilton.

The Indian batters were bowled out for a paltry 198 runs in the second innings. Skipper Mithali Raj was the highest scorer with 31 runs off 56 balls. Lea Tahuhu and Amelia Kerr took three wickets each for New Zealand.

The Indian batter’s intent out in the middle was heavily criticized by the fans and pundits on social media. The openers, Yashika Bhatia and Smriti Mandhana played with a strike rate of just 47.46 and 28.57 respectively.

Deepti Sharma and Pooja Vastrakar too batted with a strike rate in 30s. Harmanpreet Kaur was only one of the few batters who showed some aggressive intent at the crease. She slammed 71 runs off 63 balls, with six boundaries and two sixes. However, the right-hander ran out of partners from the other end.

Back to their best 💪

After a close defeat against West Indies in their opener, New Zealand pick up two comprehensive wins against Bangladesh and India 👏👏👏#NZvIND #CWC22

Speaking at the post-match presentation ceremony, the Indian skipper, Mithali Raj said, “It was a chasable score, provided the top order managed the run-rate properly. We needed one of the batters to bat deep.”

With the required rate being over 5, before the start of the play, India’s batters’ intent baffled many. India managed just 50 runs on the board in the first 20 overs. From there the team, could not manage recovery and conceded the match to New Zealand by 62 runs.

Earlier in the match, Pooja Vastrakar took four wickets for 34 runs in 10 overs. Amy Sattherwaite slammed 75 runs, off 84 balls, including nine boundaries along with Katey Martin’s 41 to take New Zealand to a match-winning total. Satterthwaite won the Player of the Match award.

Let’s take a look at how Twitterati reacted to India’s poor batting intent:

Wonder what the batters out in the middle make of the situation..

A wonderful innings from Harmanpreet comes to an end. The top and middle order failures meant, india was never in the match. The first 20 overs show how they never showed the intent to chase it.#INDvNZ

Not a single strike rate above 50!!

I wonder if anyone from the team management ever questioned Mithali Raj's strike rate? Had they, then we would've surely seen some change in her batting approach, but there were none at all.

If your no. 7 & no. 8 can resurrect the inns from 114-6 with both going at more than run a ball, you have to wonder (if not question), what stops the specialist batters from going at least a SR of 80 if not more.

Is it down to skill? Or form? I don't know since I am not an avid

Really poor game from India today. Look at the strike rate of the batters in a 261 run chase.

Difference between New Zealand and India's batting so far – INTENT. No doubt strike rate depends on situation, but at least show some intent & focus on strike rotation.🤦🤷 #NZvIND #CWC22

There are going to be a few questions about strike rate in the PC today, aren’t there? #StrikeRateRowdies #CWC22 #NZvIND

Don’t understand the Indian batting game plan , playing as if the target is 160 not 260. Too slow to begin no aggression!
Vastrakar and Sneh rana bailed them out last match! #NZvIndia

What are Indian batters upto? 50 runs in 20 odd overs…chasing 261…And pundits blame journalists for writing about strike rate! #INDvNZ #CWC22