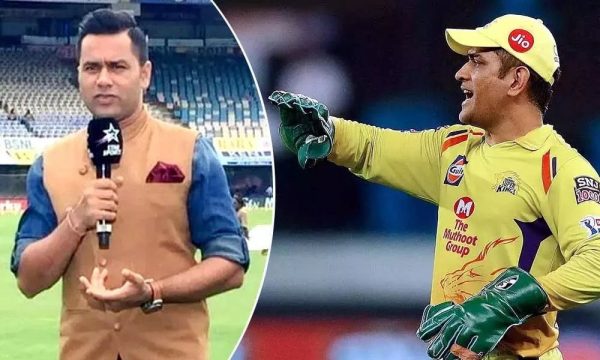 Chennai Super Kings skipper MS Dhoni has reached the twilight of his cricketing career. Ever since he announced retirement from international cricket in August 2020, speculations were on an all-time high that he might bid farewell to competitive cricket after IPL 2020 in the UAE. However, Dhoni himself confirmed that he will return for IPL 2021 and lead Chennai.

During Chennai Super Kings’ last match in IPL 2020, MS Dhoni answered with a firm ‘definitely not’ when commentator Harsha Bhogle asked if IPL 2020 was the last for him in a CSK jersey. A couple of months later, the former India skipper has once again turned up for his favourite Chennai side as the franchise look to bounce back from their poor season in the last edition where they finished seventh and failed to make it to the playoffs for the first time in history.

Not sure about MS Dhoni’s future in CSK – Aakash Chopra

Meanwhile, Chennai Super Kings have found their lost rhythm and are back at the top of the points table. But Aakash Chopra is in a dilemma about Chennai’s retentions for IPL 2022. Incidentally, BCCI is planning for a ten-team tournament next year with a mega auction. Considering this, the cricketer-turned-commentator is not sure if the three-time IPL champions will retain their incumbent skipper.

“MS Dhoni may not play for three years. If MS Dhoni doesn’t play three years, would you retain him? Your Rs 15 crores could be in vain. On the other hand, you may not get a big player like him again. I don’t know about MS Dhoni,” Chopra said on his YouTube channel.

“It is a bit tough to predict CSK’s three retentions. Ravindra Jadeja will be my number one choice and my only choice. Because Sam Curran, Faf du Plessis and such players you can get again in the auction, they won’t fetch 12 crores there,” he added.

However, CSK CEO K Viswanathan had told the Indian Express that the franchise isn’t looking for Dhoni’s replacement going ahead. It will be interesting to see if CSK go ahead and retain him as one of their three marquee players prior to next year’s mega-auction.