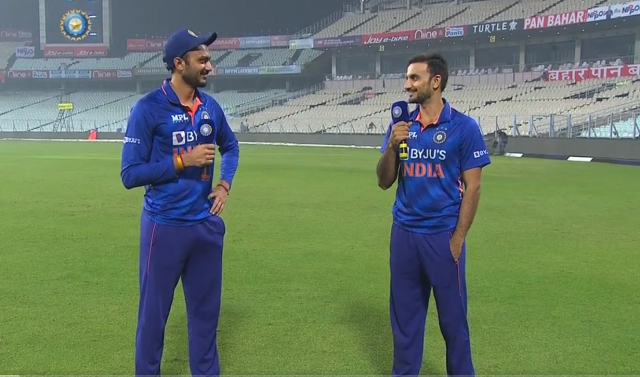 India beat New Zealand by 73 runs in the third and final T20I to complete a clean sweep in the series. Axar Patel won the Man of The Match award for his figures of 3 for 9. It was Harshal Patel who won the man of ther Match in his T20I debut in Ranchi. Courtesy of Axar’s exploits, The Kiwis could only score 111 in 17.2 overs.

Meanwhile, after the game. both Axar and Harshal spoke about India’s series win. In a video shared by the BCCI Twitter handle, they spoke about their and the entire team’s performance in the series.

“It was an exceptional feeling. I mean, I didn’t expect the debut match to go this well because all my debuts before today have never been this good. But I executed my skills well and the result was also in our favor and we ended up winning the game. I don’t know, we haven’t decided it but it seems like the Man of the Match will stay between us Patels!”

Suryakumar Yadav was the Man of the Match in the first game, Harshal Patel in the second and Axar Patel in the third. Indian skipper Rohit Sharma, ended up as the Man of the series for his consistent batting. Axar further asked the medium-pacer about his performance when the latter said that he had a certain mindset and he performed according to the same in the two games that he played.

“The change for me has mainly been in the mindset. I had all these skills before as well. The mindset change in the last two years has got me the results. And whatever I did in the IPL, I had decided to carry the same mindset in this series. Those things are working for me and I am very happy about it.”

The two teams now will play a two-Test match series. The first Test is in Kanpur (November 25-29) followed by the second in Mumbai (December 3-7).