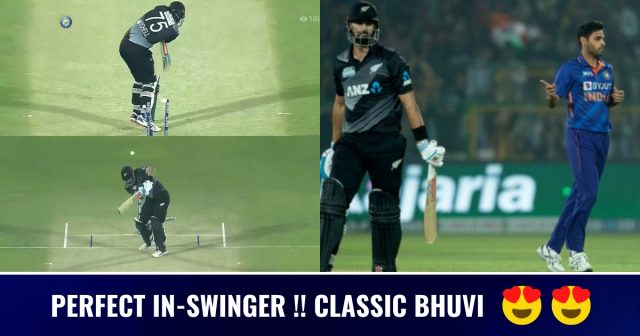 India made a terrific start in the first T20I against New Zealand in Jaipur. Bhuvneshwar Kumar dismissed Daryl Mitchell for a first-ball duck. Mitchell has endured a dream run in recent times which includes the T20 World Cup. However, he failed to negate the inswing from the experienced bowler.

Bhuvneshwar Kumar on the other hand did not have a good outing in the T20 World Cup. However, he made a roaring comeback in the first over itself by dismissing the Kiwi opener. It was a ball, which was bowled on a length that came back prodigiously after pitching. This also ended Mitchell’s dream run of some sort.

The Kiwi opener scored a match-winning 72 in the semi-final against England. However, he scored just 11 in the final. Mitchell ended with 208 runs from seven games.

India won the toss and opted to bowl first. Venkatesh Iyer is making his debut for India. The squad is a fresh one with many players rested. Rohit Sharma is leading his first game for India as India’s full-time T20I skipper.

This is Rohit Sharma’s first game as India’s full-time T20I skipper. Previously he has led India on a few occasions but now he has been given the responsibility on a regular basis. together with Rahul Dravid, Rohit spoke about taking team decisions keeping the T20 World cup 2022 in mind. It will starting from October 16 2022 and potentially India have just over 10 months to prepare a squad that can win the World Cup.

“We will bowl first. The wicket looks good, thought behind is to have a score behind us, there was quite a lot of dew while practicing from a couple of days. It’s been good, has been only 2 days, been a quick turnaround, back from Dubai, spent a couple of days at home and back here. But it’ll be good for the team. We have Shreyas Iyer back, Venkatesh is debuting, Bhuvi, Siraj and Chahar are back. We’re playing three seamers and two spinners. We have one eye on the next World Cup, it’s a lot of time ahead, we’ll try our options, some results might not be immediate, but the process will be crucial” Rohit said at the toss.