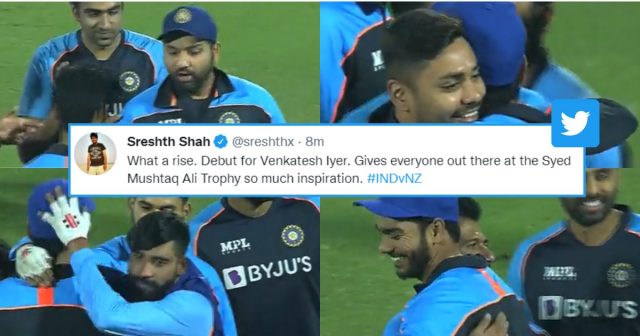 Madhya Pradesh all-rounder Venkatesh Iyer was handed his India cap ahead of the first T20I against New Zealand in Jaipur. He will be playing as an all-rounder in the line-up. As of now he is slotted in at number six in the batting order and will bowl his quota of overs when required in the game.

Rohit Sharma’s India’s new T20I skipper handed over the cap to Venkatesh Iyer. He also spoke about the role of the all-rounder at the toss. Iyer himself had a chat with Star Sports ahead of the start of the game and spoke about his feeling of representing India. His IPL and Syed Mushtaq Ali credentials have played a huge role in the selectors recognising him for the series. He is a like for like replacement for Hardik Pandya who has struggled off late to get going for India.

“Everyone who plays cricket aspires to play for the country, so I feel good that I’ve been presented with this opportunity. Feels good to play under Rahul (Dravid) sir, I’m really excited and looking forward to it. As a cricketer you got to be flexible, and I’ll look to capitalise on the role I’ve been given. I’m ready to bat at any position, or bowl whenever I’ve been asked to. It’s wonderful to play in front of the (Indian) crowd, it’s great to have them back” said Iyer.

Venkatesh Iyer Gets His Cap From Rohit Sharma

A moment to cherish for @ivenkyiyer2512 as he makes his #TeamIndia debut. 👏 👏#INDvNZ @Paytm pic.twitter.com/2cZJWZBrXf

The Twitterverse congratulated Iyer on getting his India cap. Wishes came pouring in from various quarters wishing him the very best for his international career.

Both Iyer play. Ishan misses out. Going by the comments to this, it felt that I committed blasphemy 😝🤪 https://t.co/iiGfMOvSbJ

Excited to see Venkatesh Iyer today. Interesting to see where and how does he bat #NZvsInd

All the best Venkatesh Iyer 💜

What a rise. Debut for Venkatesh Iyer. Gives everyone out there at the Syed Mushtaq Ali Trophy so much inspiration. #INDvNZ

Just In: Venkatesh Iyer is making his India debut in the first T20I vs New Zealand 👏👏#VenkateshIyer #INDvNZ pic.twitter.com/0xpOJjDUYQ

India have won the toss and opted to bowl first at the Sawai Man Singh stadium, which is hosting its first-ever T20I.

“We will bowl first. The wicket looks good, thought behind is to have a score behind us, there was quite a lot of dew while practising from a couple of days. It’s been good, has been only 2 days, been a quick turnaround, back from Dubai, spent a couple of days at home and back here. But it’ll be good for the team. We have Shreyas Iyer back, Venkatesh is debuting, Bhuvi, Siraj and Chahar are back. We’re playing three seamers and two spinners. We have one eye on the next World Cup, it’s a lot of time ahead, we’ll try our options” said Rohit at the toss.