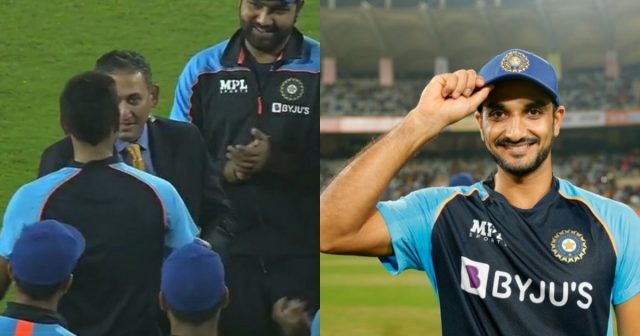 Harshal Patel is all set to make his T20 international debut for India in the second T20I against New Zealand in Ranchi. He has been included in the playing Xi in place of Mohammed Siraj who injured his left hand in the first T20I. India head into this game leading the three-match series.

Harshal Patel received his India cap from former Indian pacer Ajit Agarkar. Agarkar is in Ranchi as a part of the Star Sports commentary team. Harshal’s consistent domestic and IPL performances have been rewarded with him being included in the playing XI. The BCCI uploaded a video of Harshal getting his cap amid cheers from his Indian teammates.

🎥 🎥 Congratulations to @HarshalPatel23 who is set to make his #TeamIndia debut. 👏 👏@Paytm #INDvNZ pic.twitter.com/n9IIPXFJQ7

Indian skipper Rohit Sharma won the toss and opted to bowl first. He now has won back to back tosses as India’s T20I skipper. 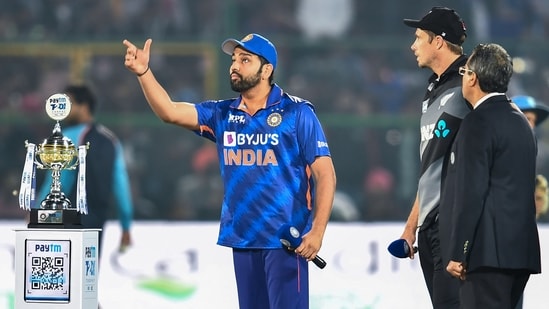 “We are going to field first. We have seen it here, it’s a nice option to go with. Considering the dew factor, it’s good to chase in Ranchi. It was a good effort from the boys. It was a good learning for them as they finished the game, it was a good positive to have from that game. The game is such that you need some energy and experience. We have youngsters who want to express themselves, it’s a good setup, it’s important moving forward. We have one forced change, Siraj injured his finger in the first game, so Harshal comes in” Rohit said.

Kiwi skipper Tim Southee said he was looking to bowl first as well. Howver he said that he will take the challenge head on and his batters will try to post a good score. The playing XI features three changes.

“We would have bowled first, taking the dew into consideration, but there’s going to be dew right throughout the game. It’s always about trying to improve, so we had to keep fighting and take the game deep in the first match. We have to focus on the positives. We’ll have to deal with the dew, no point of using it as an excuse, we just need to find a way to put up a good performance. We have three changes. Milne, Neesham and Sodhi are back for Ferguson, Rachin Ravindra and Astle.” said Southee.