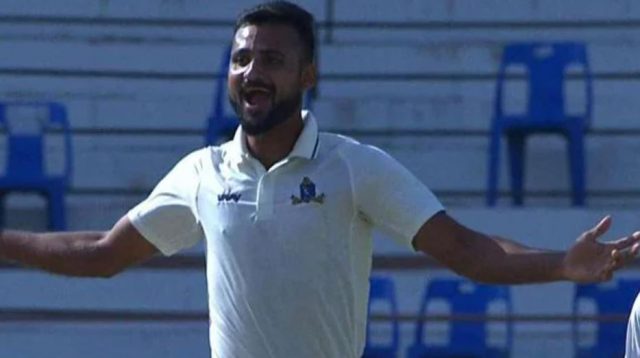 Akash Deep is the newest addition to the Royal Challengers Bangalore squad. The pacer will replace injured Washington Sundar for the second phase of the Indian Premier League 2021 in the UAE. Sundar suffered an injury during the warm-up match in England, which has ruled him out of the remainder of IPL 2021.

This move reiterates the focus RCB has on grooming and nurturing young players as we continue to develop exceptional talent and create a pathway for youngsters to find their way into IPL and Indian Cricket.#PlayBold #WeAreChallengers #IPL2021 #NowAChallenger pic.twitter.com/vXXaqO8N9f

In this article, we will take a look at five facts about Royal Challengers Bangalore’s new addition Akash Deep.

Early Days as a cricketer

Given the limited cricketing opportunities in Bihar, Ramji, Akash’s father did not want his son, to take up the sport as a career. However, Akash kept playing cricket secretly. In 2010, Akash Deep moved to Durgapur, Bengal to find a job. He stayed with his uncle, who enrolled, Akash and his cousin in a local cricket academy. Aakash started playing the sport as a batsman, however, due to his stature, he turned to pace bowling.

Setback in his career

While Akash Deep was playing in Durgapur, a family tragedy forced him to return back home. His father, Ramji passed away after suffering a stroke. Two months after his death, Akash’s older brother also passed away. To take care of his family, Akash spent three years away from the sport.

Despite, the struggles, Akash Deep’s love and passion for the game, brought him back to Durgapur. He rented a small room and was inducted into the United Club in CAB’s Second Division League. His brilliant performances led to his rise as one of Bengal’s promising prospects.

In 2019, Akash Deep was selected in the U23 Bengal squad and then made his T20 debut for the team in Syed Mushtaq Ali Trophy. Within a few months, Akash made his first-class debut. Senior player Ashoke Dinda was dropped from the Bengal squad following a row with the team’s bowling coach Ranadeb Bose, which paved way for Akash Deep’s Ranji Trophy debut.

Akash Deep has represented Bengal in nine first-class matches so far. He has picked up 35 wickets, with 7/104 being his best in a match. The pacer has played 11 List A games, taking 17 wickets. He also has 21 T20 wickets to his name.