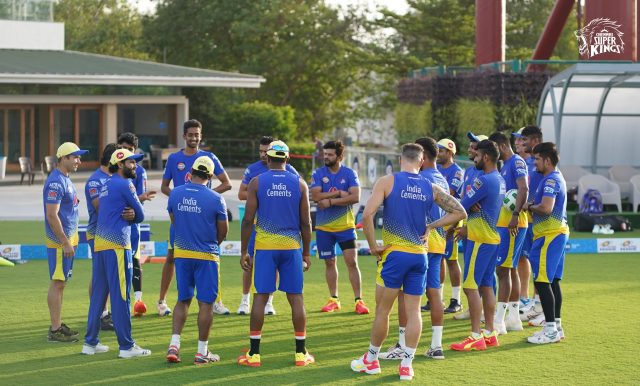 Chennai Super Kings (CSK) have already reached the UAE for the remaining phase of IPL 2021. It will be held from September 19- October 15 across the three venues. 31 matches will be played over 27 days in the meantime. The UAE leg resumes with CSK taking on Mumbai Indians on September 19 in Dubai. The MS Dhoni-led team have started their preparations in full swing at the ICC academy.

CSK’s official Twitter handle shared a picture of MS Dhoni with is bat going for a net session. The former Indian skipper aging 40 now will be featuring in the 15th IPL season. He was seen with his kit bag and his bats, which have the number 7 mentioned on the side.

The handle shared a few other pictures of the team huddle talking and strategising about their upcoming matches. Suresh Raina was also seen being a part of that meeting and giving his invaluable advice.

The side lost to Delhi Capitals and Mumbai Indians while winning all their remaining matches. Chennai Super Kings will play three matches at the Dubai International Stadium along with two each at Sharjah and Abu Dhabi.

Chennai Super Kings are currently in the second spot after Delhi Capitals before the tournament was called off on May 4 due to the COVID crisis. MS Dhoni & Co will look to continue the rhythm when IPL 2021 resumes in the UAE on September 19.

Recently MS Dhoni celebrated his retirement anniversary on August 15. In 2020, on this very day at 7.29 pm, the former Indian skipper announced his international retirement. The ICC 2019 World Cup semi-final was his last international game for India after which he went on a hiatus from cricket.

He made his debut for India in 2004 and played four 50-over World Cups for India. As a captain, he won three ICC titles (T20 World Cup, 50-Over World Cup and Champions Trophy). He also won a few Asia Cup titles as well as captain of the Indian team. Under him, India also topped the ICC Test rankings in 2009 as well.