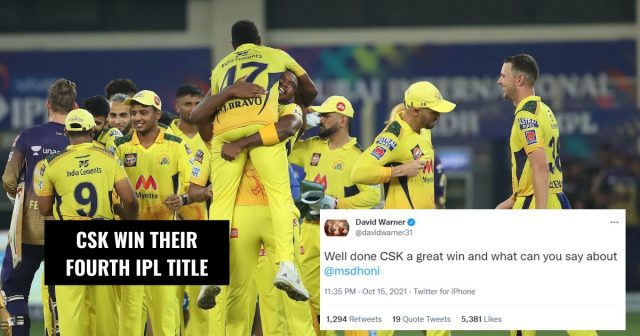 KKR had an opening partnership of 91 runs inside the first 10 overs. However, it all went down after Venkatesh Iyer’s dismissal for 50. In a bid to keep upto the asking rate, the KKR batsmen perished in their efforts to score big.

The middle-order of Dinesh Karthik, Eoin Morgan and Shakib Al Hasan failed to deliver as Andre Russell’s absence was felt dearly by the side. The CSK bowlers after the initial partnership kept chipping away with the wickets.

Before being on target with the ball, Faf Du Plessis (86) ensured that he helped CSK get to a score of 192. Contributions from Ruturaj Gaikwad (32), Robin Uthappa (31) and Moeen Ali (37) helped the team in the process.

Congratulations @ChennaiIPL! Don’t worry @KKRiders, we’re still 2 out of 3. Keep ur heads up!

Hey @imjadeja how many titles is that?!

“ We’ll Come back strong,
that’s what we are known for”#MSD said it Last year & He Did it this year…..
Congratulations @whistIepodu n their 4th #IPL Trophy
#CSK #CSKvKKR #IPLFinal pic.twitter.com/dLPyoq9whP

I mean, they pretty darn good 👍

Earlier in the day, KKR skipper Eoin Morgan won the toss and opted to bowl first favouring the side to chase the score down. However, as it turned out, the target was a bit too stiff for the KKR batting lineup with their misfiring middle-order adding to their woes.