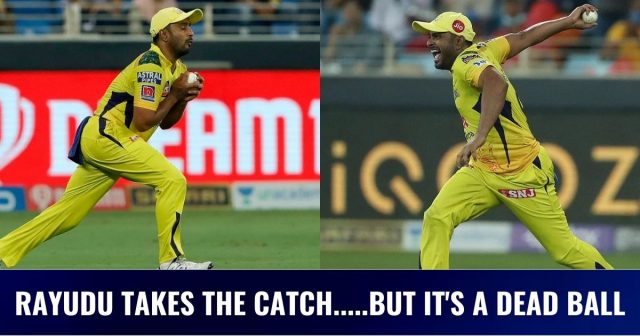 Shubman Gill got a second lease of life in the IPL 2021 final with KKR chasing 193 to win. Ventakesh Iyer and Gill gave The Knights a good start in their quest to chase the title down. Both played with an attacking approach and added 91 for the first wicket before Iyer was dismissed.

Meanwhile, coming into bowl his second over, Ravindra Jadeja got Shubman Gill caught at deep mid-wicket. Gill hit the ball across the line as it skied up into the night sky. It went miles into the night sky and hit the spider cam on its way coming down.

Ambati Rayudu initially misjudged the ball under lights but then kept his calm to complete the catch. However, the drama unfolded after television replays showed that it hit the spider cam. The third umpire ruled the ball as a dead ball as MS Dhoni has a look of disappointment on his face.

KKR, who have won two titles previously won their first against Chennai Super Kings back in 2012. Meanwhile, batting first, CSK piled up 192/3 batting first with contributions from Faf Du Plessis and Ruturaj Gaikwad.

Eventually, the entire top-order of CSK fired to take the team to a huge score. Ruturaj Gaikwad scored 32 off 27 balls and in the process owned the Orange cap. He stands at 635 from 16 games followed by Faf Du Plessis on 633 from 16 games as well.