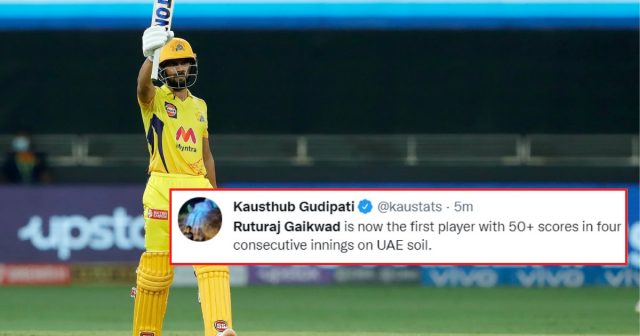 Chennai Super Kings opener Ruturaj Gaikwad rescued his side from being 24/4 as he hit a half-century and getting his side to a respectable score. CSK skipper MS Dhoni won the toss and opted to bat first and lost four wickets inside the powerplay. CSK lost Faf Du Plessis, Suresh Raina and MS Dhoni after Ambati Rayudu was retired hurt.

Ruturaj Gaikwad along with Ravindra Jadeja added an 81-run stand. In the process, he played some lovely shots and the partnership was also quick from the two batters.

What a turnaround for #CSK. There is a lot of making up for Quinton de Kock. Remember it was 35-4 at that stage and Gaikwad was 19(24). He has played a stunning innings since

#Gaikwad 👏👏 Grown so much ib stature in just a year!

For a young man of slight build and classical batting technique, Ruturaj Gaikwad has adapted very efficiently to T20 cricket.

Fifty partnership between Ruturaj Gaikwad and Ravindra Jadeja. Excellent knock Gaikwad is playing there at a much needed time after an early collapse.

There will never be a young player better than Ruturaj Gaikwad. pic.twitter.com/IfqIr0UI7S

Should we bow him ? Yes Ruturaj gaikwad is a king. #CSKvMI pic.twitter.com/H2NgzawGqJ

When the whole league was struggling to counter Sundar in IPL 2020, Gaikwad came in and casually smashed him around. One of the world's best RHBs against spin.

Gaikwad played shots against some good bowlers from Jasprit Bumrah and Trent Boult. He attacked Rahul Chahar as well who bowled in the middle overs.

CSK skipper MS Dhoni won the toss and opted to bat first. Sam Curran is not a part of CSK’s playing XI for the opening game. Josh Hazlewood replaces him in the XI. Moeen Ali is also a part of the playing XI.

“We will bat first, looks like a good wicket. Setting a target will be a better option. It’s the same for everyone. I can’t say if it’s a good break or not. Once tournament starts, you get into some sort of rhythm but this season it’s new and maybe us cricketers will start loving it. Seven games, then a break, and seven more. It comes down to how you play on that day in the shortest form. We’ll try to do the basics right and focus on the process. Sam is not available. Faf, Moeen, Bravo and Josh are playing this game” said Dhoni at the toss.

In the last seven meetings between the two sides, Mumbai have won seven while CSK just one. Ruturaj Gaikwad ended on an unbeaten 88 with CSK finishing on 156/6 after their 20 overs. CSK scored more than 100 runs in the last nine overs tanks to Gaikwad’s fireworks.

“Proud that I carried the innings for my team. My job was just to bat long at that stage (when they lost early wickets). You always have to start fresh, it’s good to get off to a great start. It’s a two-paced wicket and there’s a bit of turn for the spinners as well” said the CSK batsman after his heroic knock.