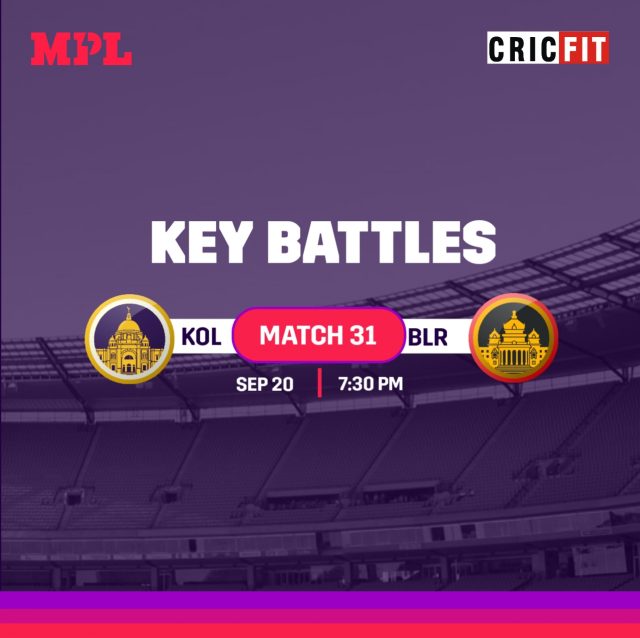 After a cracking start to the second phase of IPL 2021, the second tie will see Kolkata Knight Riders (KKR) go up against Royal Challengers Bangalore (RCB) at the Sheikh Zayed Stadium in Abu Dhabi on Monday. While Bangalore are placed third in the points table, Kolkata have a lot of catch-ups to do after ending the first leg in India with only four points from seven matches.

RCB have strengthened their line-up with a couple of replacement signings in the break. The spotlight will be on Singapore-based all-rounder Tim David and Sri Lankan all-rounder Wanindu Hasaranga. Both have been making a lot of noise in the T20 format and will want to make a perfect start in the IPL.

On the other hand, the Kolkata Knight Riders had a disastrous first phase. KKR’s batting relies a lot on their openers – Nitish Rana and Rahul Tripathi. Dinesh Karthik will have to hold their middle order together, with Andre Russell, going for the hits. In the bowling department, they will bank on Varun Chakravarthy to play a major role.

On that note, let’s take a look at 3 key battles from the RCB vs KKR tie in Abu Dhabi for MPL fantasy cricket:

The former Proteas batsman AB de Villiers is one of the most lethal hitters of the ball in the shortest format of the game. The right-handed batter smashed a brilliant century to gear up for the second phase of the tournament.

It will be interesting to see when AB de Villiers goes up against the West Indies all-rounder Andre Russell in the middle-overs which holds the key to this tie.

So far, both of them have faced each other on five occasions, where AB de Villiers has had the better of his opponent. The former South African captain has smashed 87 runs at a strike rate of over 245 while Russell hasn’t dismissed him even once.

Andre Russell will look to pull things back and level terms on Monday’s encounter.

This on-field duel will be one to watch out for. Virat Kohli, who recently announced that he will step down as RCB captain after IPL 2021, will bat a lot freely against KKR and once he gets going it would be difficult for the Kolkata-based franchise to stop the talismanic run-scorer.

KKR will mostly depend on West Indies spinner Sunil Narine to stop the run machine. Overall, they have faced each other in 12 matches where Kohi has scored 99 runs at a strike of 105.3. On the other hand, Sunil Narine has got the better of the RCB skipper only twice.

It remains to be seen who has the last laugh in today’s encounter. if KKR manage to get Virat Kohli out early, they will be on top throughout the game.

Much like Virat Kohli, RCB depend heavily on AB de Villiers. He has done the bulk of the scoring for the franchise in recent times and KKR will have their plans ready to stop the former South African cricketer.

The Eoin Morgan-led side would look forward to spin wizard Sunil Narine to stop AB de Villiers from get going. So far, both of them have faced each other on nine occasions with Narine getting the better of de Villiers three times.

On the other hand, the veteran batsman has managed only 45 runs against the West Indian spinner at a strike rate of 135.3. All eyes will be on AB de Villiers and how he manages Sunil Narine.