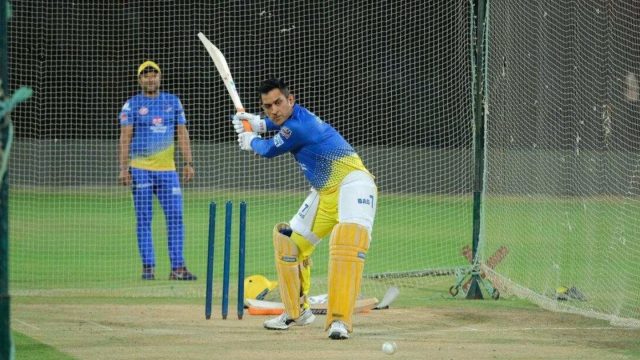 The Chennai Super Kings have already landed in UAE ahead of the second phase of the Indian Premier League 2021, which will kickstart on September 19.

On Friday, the Chennai Super Kings’ players started their preparations after completing the mandatory quarantine. Skipper Mahendra Singh Dhoni and his team hit the nets at the ICC Academy in Dubai to train for the marquee tournament. A video featuring Mahendra Singh Dhoni is doing the rounds on social media.

In the video, Dhoni is seen smashing the bowlers and hitting towering sixes out of the park. An Instagram user, @d7f.reels posted the video on their Instagram profile.

The Chennai Super Kings shared a short video from their training session on their social media account. The likes of Suresh Raina, Ruturaj Gaikwad, Deepak Chahar, and others engaged in a football warm-up session before getting to the nets. The Chennai Super Kings wrote, “Day 1️⃣ -Training from the 🦁 house! #WhistlePodu #Yellove 💛”

The Chennai Super Kings had a great run in the first phase of the Indian Premier League 2021 season. They are second on the points table below the Delhi Capitals with five wins in seven matches and a Net Run Rate of +1.263.