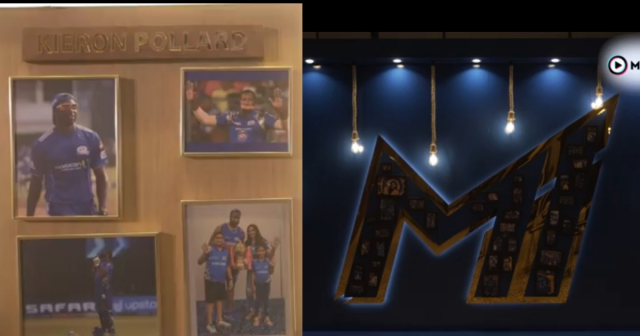 The five-time champions of the Indian Premier League (IPL) have shared a video with fans on their social media ahead of the second phase of IPL 2021. Notably, In the video, the defending champions Mumbai Indians were seen sharing a glimpse of their new team room.

Recently, Members of the Champion franchise Mumbai Indians arrived in Abu Dhabi on August 13 for the second phase of Indian Premier League (IPL) 2021. Also, the squad was seen celebrating after finishing the mandatory quarantine period of one week. Notably, the Mumbai Indians boys were seen enjoying the game of pool volleyball.

Meanwhile, the clip of the franchise’s new team was shared across their social media handle on Sunday, 22 August. In the room, the pictures of star players like Jasprit Bumrah and Kieron Pollard were seen on the wall. Not only this every player from the team has been provided a separate slot on the wall.

The grand room consists of facilities like a spacious play zone and a separate playing arena for kids. Mumbai Indians captioned the post:

How Did Mumbai Indians Perform in India Leg of IPL 2021?

As always Rohit Sharma-led team started the season with a loss against Virat Kohli-led Royal Challengers Bangalore. However, after that, they made a good comeback. Mumbai Indians played a total of seven games and remained victorious in four of them losing the other three. They were placed on the no.4 spot when the season was suspended due to the Covid-19 spread.

Notably, the last match they played was against Chennai Super Kings. That match was a nail-biting encounter between the teams. Meanwhile, In the end with the help of Kieron Pollard’s exceptional knock, Mumbai Indians were able to chase the humongous score of 219.

Meanwhile, In the first match of the second phase of IPL 2021 Mumbai Indians will face off against Chennai Super Kings in Dubai on September 19. Also, the Rohit Sharma-led franchise has an opportunity to create history by winning the title third consecutive time.