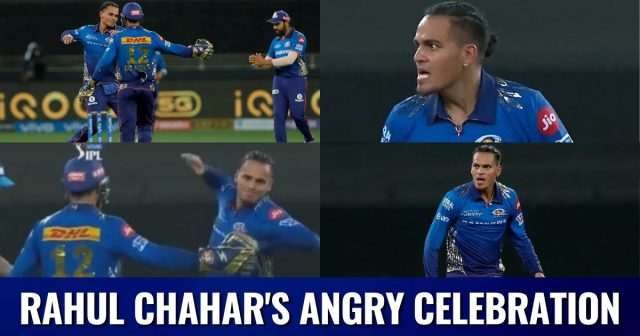 Mumbai Indians and Royal Challengers Bangalore are playing a crucial game in Dubai tonight. Both the teams have lost their first two games and are trying to bounce back. Rahul Chahar has bowled out giving away 33 runs off his spell. However, RCB are still well placed to score at least close to 180.

Rahul Chahar has been the go-to spinner for Rohit Sharma and has done the job more often than not. In this game too, he dismissed Srikar Bharat in the ninth over after adding 68 runs for the second wicket. After taking the wicket, Chahar became very angry at the batsman and even gave him a send-off which was caught on the camera as well.

Meanwhile, earlier in the game, Mumbai Indians won the toss and opted to bowl first. Hardik Pandya is back for the Mumbai Indians while there are a few changes in the RCB XI as well.

“We are gonna bowl first. We have tried everything in the two games we played and I though a score in front us to have a crack would be ideal. Important to focus on game in hand and keep ticking those small boxes. He (Hardik) is very passionate about the game and passionate about his comeback, from a team’s perspective it’s a great boost for us. Just one change” Rohit said after winning the toss.

“Would have bowled first as well, don’t think the track will change much. We had a team chat together and we haven’t been outplayed and made some mistakes ourselves. When the crunch moment arrives, you have to back yourself and that’s been the chat to play expressive cricket. It’s about executing them with courage. They are one of the strongest sides in the IPL and are a very difficult side to play against and want to match the intensity and belief. We will have to be at the top of our game tonight” said Kohli at the toss.