The Sunrisers Hyderabad will be without the services of their skipper Kane Williamson in their final league stages match of the Indian Premier League (IPL) 2022 season. Kane Williamson left the team’s bio-bubble to attend the birth of his second child.

On Wednesday, the Sunrisers Hyderabad took to Instagram, to share the news. They wished the Kiwi batter and his family a lot of happiness. Williamson will not take further part in the tournament.

The Sunrisers wrote, “Our skipper @kane_s_w is flying back to New Zealand, to usher in the latest addition to his family. 🧡 Here’s everyone at the #Riser camp wishing @kane_s_w and his wife a safe delivery and a lot of happiness!”

The Sunrisers Hyderabad ranks eighth on the points table, with twelve points and an NRR of -0.230.  They will be playing against Punjab Kings on May 22 at the Wankhede Stadium. The match holds great importance as the Sunrisers are still alive in the race for the playoffs of the Indian Premier League 2022 season. However, they have not yet named Kane Williamson’s replacement as a skipper.

Let’s take a look at the three players who can lead the Sunrisers Hyderabad in their final league match:

Aiden Markram is a good captaincy option for the Sunrisers Hyderabad, given his experience. He was the captain of the U-19 World Cup team in 2014 and won the championship that year. The right-handed batter has also led the national team.

Markram was the skipper of the South African team against India in 2018 when Faf Du Plessis was injured. He was signed by the Sunrisers Hyderabad for 2.6 crores at the Indian Premier League auctions.

The South African cricketer has been one of their top performers this season, with an average of 51.43 in thirteen matches at a strike rate of 140.07. He is their third-leading run-getter in the tournament so far. With leadership experience under his belt, the Sunrisers Hyderabad could look at Aiden Markram as a replacement option.

Nicholas Pooran has been in brilliant form in the ongoing Indian Premier League 2022 season. In thirteen matches, he has scored 360 runs at an average of 51.43 and a strike rate of 149.

Pooran was signed by the franchise for a whopping INR 10.75 crore. He has proved his worth with consistent performances this season. The left-hander is often seen having a chat with bowlers in between deliveries and is an influential figure in the Sunrisers dressing room.

Nicholas Pooran was recently appointed as the white-ball captain of the West Indies team. He is could be take up the captaincy duties for the Sunrisers Hyderabad franchise in the absence of Kane Williamson. 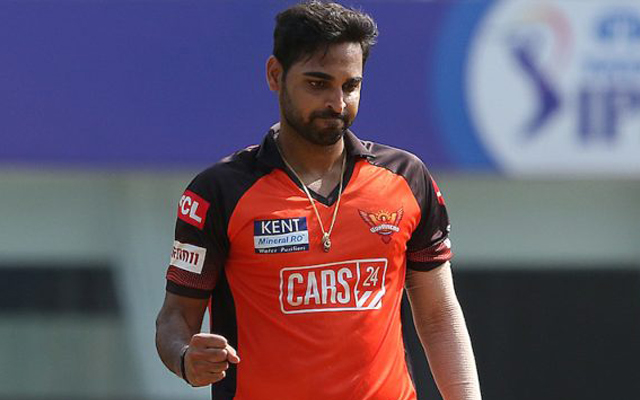 Bhuvneshwar Kumar is the front-runner among the three to lead Sunrisers Hyderabad against the Punjab Kings. He is the most experienced player in the squad in terms of games played in the Indian Premier League. The pacer is one of the mainstays of their bowling attack.

Bowling in the death overs, Bhuvneshwar has proved to be a lethal bowling option. The former Sunrisers Hyderabad vice-captain has picked up twelve wickets in the season, with an average of 30.08 and an economy rate of 7.19.

This season, he became the first Indian pacer to scalp 150 wickets in the IPL.  Bhuvneshwar Kumar’s experience of playing in the league for so many years could help the Sunrisers Hyderabad in their last league match of IPL 2022.

“Last Time We Got Served Up A Green-Top, It Was Sort Of Irrelevant” –...

Leicestershire CCC Signs Ajinkya Rahane For 2023 County Championship And One...