Lucknow Super Giants (LSG) pacer Mohsin Khan is the latest fast bowler to have made a mark in the Indian Premier League (IPL) 2022 season. He has impressed the cricket pundits and the fans with pace and accuracy in the tournament.

Mohsin Khan has taken eight wickets in four matches, at an economy rate of just 6.07 runs per over. His best of 4/16 came against the Delhi Capitals this season on Sunday. Mohsin took crucial wickets dismissing David Warner, Rishabh Pant, Rovman Powell, and Shardul Thakur. He along with Ravi Bishnoi helped the Giants to defend 195 runs, registering their seventh win of the season.

In an interview, Mohsin Khan’s coach Badruddin Siddiqui revealed that the pacer spend time with Indian fast bowler Mohammed Shami during the lockdown. The Bengal pacer owns a private ground at his native place where he has developed turf pitches.

The India bowler was training at the venue along Badruddin, his younger brother Mohammed Kaif and Mohsin during the lockdown. Speaking to News18, he said:

“It was more than a decade back when Mohsin’s elder brother Imran used to come to my academy. By then Shami had moved to Kolkata and was playing Ranji Trophy.  It was Imran who told me that his younger Mohsin is interested and if he could bring him for training.” 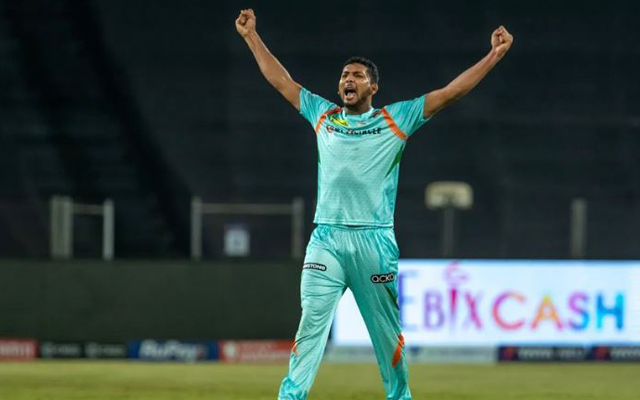 Badruddin wanted Mohammed Shami to take a look at the young pacer and guide him with his bowling. He expressed that the training sessions with the India bowler have helped Mohsin Khan. The coach said:

“It was a very small group and I had called Mohsin so that he could train and learn watching Shami. I also wanted Shami to have a look at him and give his feedback as to how he was shaping up.”

Badruddin added that Shami was impressed with the pacer and would often enquire about his progress. He further warned about Mohsin Khan’s batting capabilities and asserted that the pacer is also a capable hard-hitting batter.

“What I felt was that Shami was impressed and gave him a lot of tips. He has often enquired about Mohsin’s progress. And trust me you have seen his bowling but he is an equally capable hard-hitting batter,” said Badruddin.