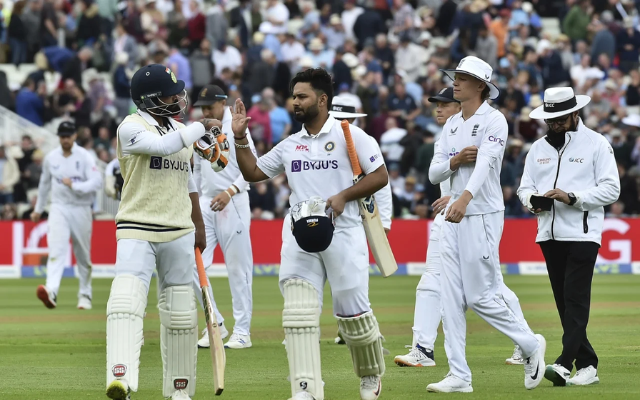 The former Pakistan pacer Mohammad Asif thinks that Team India wicketkeeper-batter Rishabh Pant didn’t have to struggle much hard as it was the England bowlers’ fault that they didn’t bowl him in his vulnerable regions in the first Test against England at Edgbaston in Birmingham.

Pant played a superb knock of 146 runs in merely 111 deliveries, with 19 fours and four sixes, at a strike rate of 131.53. Rishabh Pant smashed the hundred in just 89 deliveries to put India in the driver’s seat after the visitors were reduced to 98/5.

Criticizing the 24-year-old’s knock, Asif stated: “It was totally England bowlers’ fault as Pant did no wonders. He [Pant] has technical faults. His left hand doesn’t work but still, he managed to score a century because English bowlers didn’t bowl to him in his weak areas.”

Furthermore, Asif, in a Twitter video, said: “I will not name individuals but England made a lot of mistakes. When Jadeja and Pant were batting, they brought in a left-arm spinner who wasn’t an ideal option to bowl at that moment.”

Moreover, Asif admitted that he is not against Pant, but decisions by England turned out to be profitable for Rishabh Pant, to score big. The former cricketer then also recalled that he had directed attention at Virat Kohli’s technical faults, a couple of years ago. Although, Asif went on to acknowledge that he adores watching Kohli bat but he needs to work harder.

Besides, the English bowlers botched to stop the fantastic Indians on Day 1 and Day 2. With the help of hundreds from Pant and Ravindra Jadeja and a historic cameo from skipper Jasprit Bumrah, India set a huge total of 416.

In reply, England batters couldn’t sustain for long against Bumrah’s tough-to-face deliveries. With Mohammed Shami and Mohammed Siraj’s late strikes, England ended Day 2 at a score of 84 for 5.

However, Jonny Bairstow played a counter-attacking hundred to cross the 200-run mark but India kept bouncing back with wickets to bowl out England for 284 runs and secure a crucial lead of 132 runs.