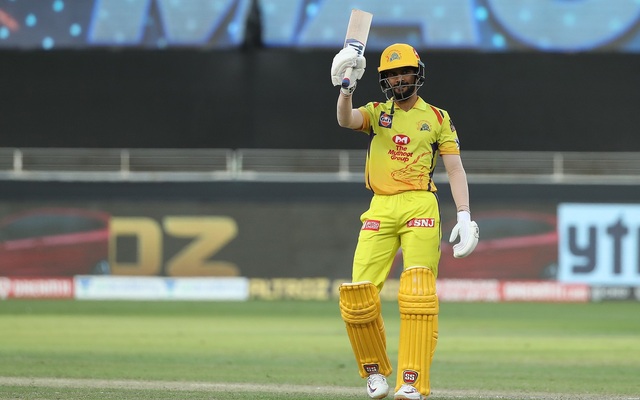 The Chennai Super Kings are perhaps back to winning ways though it too late as they defeated Royal Challengers Bangalore at the Dubai International Cricket Stadium. The youngster from Pune, Ruturaj Gaikwad’s maiden IPL fifty ensured Chennai Super Kings get across the line in the battle between MS Dhoni and Virat Kohli‘s side.

It all started at the toss as Royal Challengers Bangalore led by Virat Kohli won the toss and elected to bat first at the Dubai International Cricket Stadium. Chennai Super Kings made quite a few changes to their side as Monu Kumar, Mitchell Santner were picked in the playing XI instead of Shardul Thakur and Josh Hazlewood. Whereas Royal Challengers Bangalore decided to drop Isuru Udana for Moeen Ali.

Batting first, Royal Challengers Bangalore yet again lot Aaron Finch in the powerplay as he was dismissed by Sam Curran. Finch’s followed by Devdutt Padikkal’s wicket as they tried to attack Santner over long-on only to find Faf Du Plessis – Ruturaj Gaikwad complete a stunning catch to dismiss RCB’s emerging player of this season.

Then we had Virat Kohli and AB de Villiers notched up a partnership to take Royal Challengers Bangalore to a decent total of 145 but in the hindsight, everyone in the RCB dugout knew that they were a good 20-25 runs short. In the chase it was the Ruturaj Gaikwad show, the local boy from Pune banked on the opportunity given to him as he scored an unbeaten fifty to take Chennai Super Kings through to the finishing line.

It Was Tough For Me Because Of COVID – Ruturaj Gaikwad

The man of the match of today’s game between Royal Challengers Bangalore and Chennai Super Kings was Ruturaj Gaikwad for his unbeaten fifty. At the post-match presentation, Ruturaj Gaikwad said that it was tough for him to go back into quarantine and then make a comeback to the side given that others had already started training but everyone in the Chennai Super Kings camp supported him through this phase.

“It feels good. More importantly, winning the game for the team. And is not out in the end. It was tough for me going into quarantine for more days than the rest of the team because of Covid. I got support from everybody.

I knew a knock was always around the corner. It was a little bit slow, but I was picking up the gaps. And I was pro-active to pick which bowlers to attack and which to not,” Ruturaj Gaekwad said.