Scotland has surprised many teams with their spirited performances in the initial part of the tournament, winning all three games. Although Watt has snared only three wickets so far in as many games, India won’t take him lightly.

4-0-19-1. One of the GOAT defensive spells of T20 bowling by left arm spinner Mark Watt. SLA, who's nailing wide yorkers and ones on to the pads. Extremely tough to get away. Fantastic spell. #T20WorldCup

Mark Watt warned Virat Kohli, who he thinks has reasons to be concerned as he has plans for him. The 25-year-old is eager to play and challenge himself against the biggest stars in the world.

“I’ve got quite a few plans for Virat. I’m going to keep them hush-hush at the moment, but I think he should be worried. That’s why you play the game: to play against the big stars. You want to challenge yourself against the best and they certainly are the best in the world. All the guys are just absolutely buzzing to showcase their skills against the whole world.”

Scotland defeated Bangladesh in their first match, defeated Papua New Guinea and finally chased down 123 with eight wickets to spare against Oman on Thursday. Hence, they would be confident heading into the Super 12 stage. 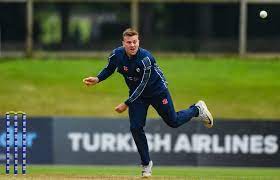 Mark Watt remains confident of upsetting a few more teams after beating Bangladesh. The left-arm spinner took heart from their win against England in 2018 and believes momentum is on their side.

“I think we’re going to make a few upsets, I don’t see why not. We’ve done it before – we’ve beaten the best ODI team in the world, we’ve beaten Bangladesh here and I think teams won’t take us lightly. They should be worried about Scotland, we’re in a great run of form and we’ve got a lot of momentum going forward. I don’t think we need to do anything else different, we’ve won three out of three,” Mark Watt added.