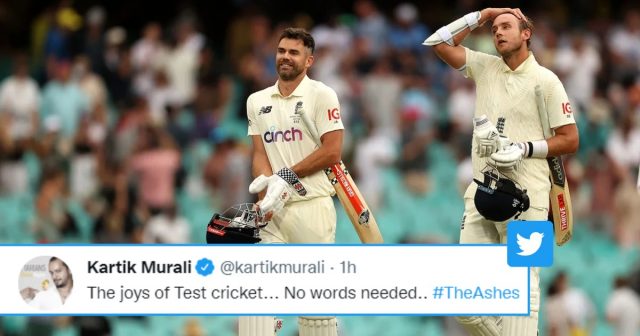 While Australia managed to win the first three Tests and retain the urn, England bounced back and registered a draw in the fourth Test after five days of gruelling Test cricket in Sydney. With this, they prevent the Aussies from whitewashing the five-match series as well.

On the final day, both Ben Stokes and Jonny Bairstow both batted well. England had to play 35 overs in the final session in Sydney. Nathan Lyon lured Stokes into a shot soon after Tea and Australia managed to claim the wicket. Soon Pat Cummins gave Australia two breakthroughs by trapping both Jos Buttler and Mark Wood leg-before. With this, their hopes of winning the match increased too.

However, Steve Smith dropped Bairstow at slip and that cost them despite Bairstow’s dismissal who looked to defend but got a thick inside edge and eventually got out after some time. Steve Smith, who had last scalped a wicket in 2016, gave Australia a breakthrough with Jack Leach (26), but James Anderson and Stuart Broad held their nerves.

Anderson survived a nail-biting final over as the visitors finished on 270/9 in the second innings. Notably, Australia had declared their second innings at 265/6, with a lead of 387 runs on Day 4 in Sydney. Usman Khawaja scored another century in his return to Test cricket as well.

The fifth and final Ashes Test between England and Australia will begin on January 14 in Tasmania as well.

Here is how Twitterati reacted to the drawn Test match:

It didn’t produce the Result but what a Test match this one was! England survived by the thinnest of margins #Ashes @SonySportsIndia pic.twitter.com/mGI9731GGZ

If that is Broad & Anderson’s last act at the SCG together, they’ve played their part in a gripping drama… even if not in the way they would have preferred #ashes Test cricket, hey ❤️

What a match! #Ashes #WTC23 pic.twitter.com/xX1XlcKYM1

That’s a step in the right direction .. Huge courage shown by the England side this week .. A draw might not seem much when you are 3-0 down but to me it is .. well done @root66 & the team .. that’s what spirit is all about .. #Ashes

Broad & Anderson battling for England (with bat) … Smith trying to win it for Australia (with ball) … what is this twilight zone inception parallel universe sorcery?!!!! 😳😀#Ashes

A brilliant Test match ends in a draw.