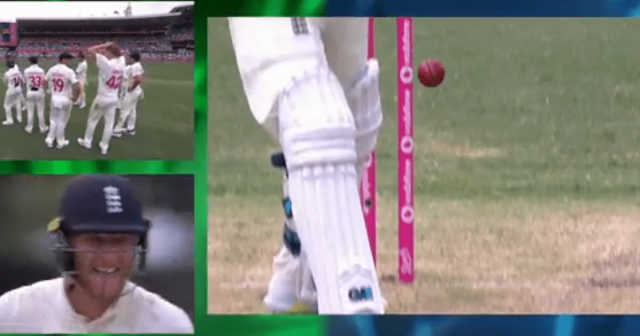 As far as the game is concerned, after winning the toss, Australia put up 418/8 declared with Usman Khawaja scoring a hundred. England, in reply, were seen struggling once again as the top four already got out. But on Day 3, Ben Stokes and Jonny Bairstow were battling when the luck suddenly favoured the former.

In the 31st over, Cameron Green bowled a full-pitched delivery which Ben Stokes decided to leave. But the ball took a deflection and Aussies appealed for an LBW and the on-field umpire gave him out too. However, Stokes immediately reviewed the decision and they saw the ball was nowhere near his pads.

Even, the ball hit the off-stump but the bails didn’t dislodge and Ben Stokes survived as well. And, after seeing the replay on the big screen, Stokes started laughing even as the Australian players couldn’t believe their eyes.

Despite a magnificent century from Jonny Bairstow, England could only accumulate 271 runs in their first innings. However, the visitors have bowled well here, not allowing Australia to break free. They have chipped away at the wickets too, and Australia were in a bit of bother at one stage at 86/4.

But Usman Khawaja and Cameron Green have since consolidated, building a partnership that’s currently worth 63. They’ll be eager to tee off sooner rather than later though. The lead is currently 271 with four sessions to go.

Australia will surely be looking to have a crack at England at some point this evening after setting a target of somewhere around 350.