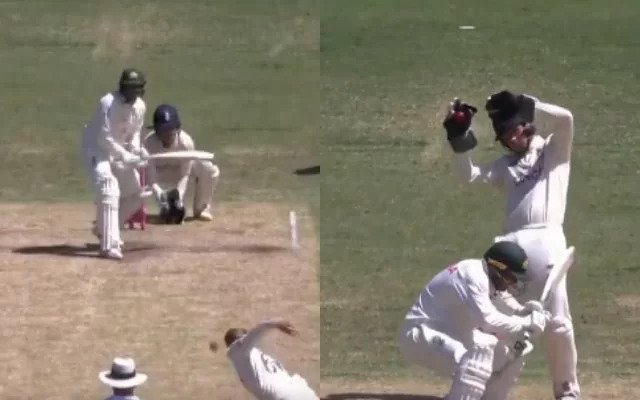 England’s Test captain Joe Root bowled a vicious bouncer to Australia’s Usman Khawaja during the second innings of the Sydney Test in the ongoing Ashes. Incidentally, Australia are on the driver’s seat after posting a target of 388 runs with England needing 358 runs in the final day.

Meanwhile, the incident took place in the 47th over when Root was bowling to in-form Khawaja, who was batting at 35. The English cricketer bowled a deadly bouncer in the last ball of the over that stunned Usman Khawaja, leaving everyone ins splits.

Ollie Pope, who was keeping in place of Jos Buttler and Jonny Bairstow was also surprised by the turn of events but caught the ball brilliantly. Incidentally, Pope was keeping the wickets with both Buttler and Bairstow out of the field owing to respective injuries.

The cricketers had a laugh before getting on getting with the game.

Usman Khawaja marks his Test return with back to back centuries

Usman Khawaja, who made a return to the Test side after a gap of almost 2.5 years, became only the 3rd cricketer in history to score twin centuries at the Sydney Cricket Ground.

The Queenslander, who came in place of Travis Head, single-handedly lifted Australia’s batting in both innings as the hosts post a daunting total to chase for England.

“No, not really. I don’t think it’s sunk in yet,” Khawaja said in the presser. “I’ve always wanted to score a century in both innings in first-class cricket and never done it. I wasn’t really sure if I was gonna do it. It didn’t really matter to me, now that I’ve played so long. I’m like it’s not the end of the world. Not a big deal, but it’s just a nice tick off and has put the team in a situation where hopefully we can try to win. Look, it all worked out pretty well. it doesn’t always happen in life and cricket. It’s special,” he added.