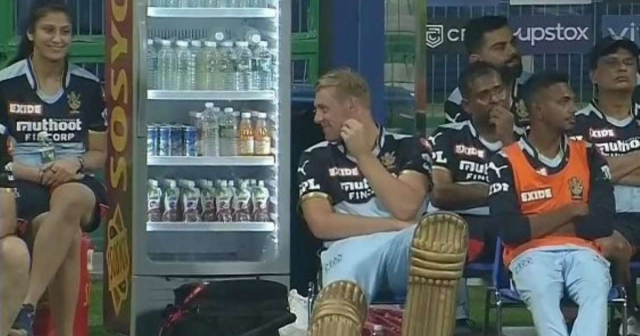 Even though Royal Challengers Bangalore (RCB) fell against Kolkata Knight Riders (KKR) by a comfortable margin, one of their players stoke the show with one of the best moments from the game. RCB were in trouble, with both Virat Kohli and AB de Villiers returning to the pavilion.

RCB were struggling at the score of 53/4. Then the camera moved towards the team’s bench. It showed Kyle Jamieson of New Zealand all geared up and ready to bat, but that was not the focus of attention. Jamieson was spotted smiling as he looked at Navnita Gautam, the team’s massage therapist.

It went viral as soon as it was aired on television. The image sparked dozens of funny memes on social media. One of the users compared Jamieson to a college senior trying to impress a fresher girl in college.

Check out the hilarious reactions here:

She : Tell me those Three words

Jamieson : We are Chokers pic.twitter.com/az40jho2Rh

In terms of the match, Virat Kohli and his teammates had a dismal outing. The RCB captain, who was playing his 200th IPL match, had a terrible outing. Kyle Jamieson, on the other hand, also had a bad day on the field. Following a top-order collapse, the New Zealander could only score four runs in the twelve balls he faced. With the ball also, he was costly, giving up 26 runs in two overs without picking up a wicket.

RCB lost wickets at frequent intervals since none of their batters could put up a fight, and they were eventually bowled out for 92 runs. Shubman Gill’s 48-run knock and debutant Venkatesh Iyer‘s not-out innings of 41 runs off only 27 balls helped KKR chase down the target in just 10 overs. With three wins in their eight games, Kolkata Knight Riders are placed at the sixth position in the points table.