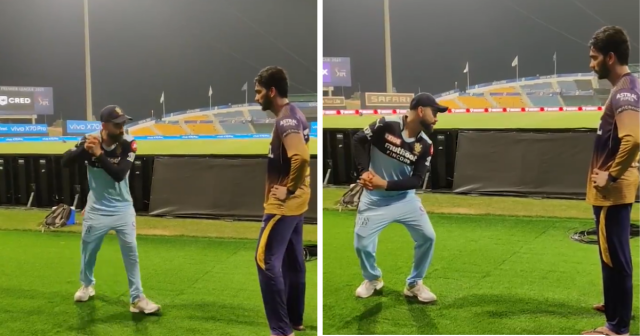 Royal Challengers Bangalore (RCB) captain Virat Kohli was seen sharing imparting knowledge to youngster Venkatesh Iyer after their game against Kolkata Knight Riders in Abu Dhabi on Monday. Incidentally, RCB suffered a humiliating nine-wicket defeat after being bowled out for a mere 92 runs.

Venkatesh Iyer, who made his IPL debut, played a swashbuckling knock to take his side home. He remained unbeaten on 41 runs from 27 deliveries as Kolkata sailed through in just 10 overs.

Meanwhile, KKR’s Twitter account shared a video clip of Virat Kohli in an animated conversation with Venkatesh after the game. The talismanic run-scorer was seen sharing some batting tips with the 26-year-old who plays for Madhya Pradesh in domestic cricket.

Dream debut + Learning from the best 😍

Virat Kohli admitted that RCB lacked good partnerships, which made the difference between the two sides. Speaking at the post-match presentation ceremony, Kohli said:

“It was important to get a good partnership. We didn’t expect that much dew to kick in that early. From 42 for 1, we lost 5 wickets for 20-odd.”

Virat Kohli said "I was saying in the dug-out that Varun Chakravarthy form is very good from India point of view in the WC and future".

“It was a bit of a wake-up call, might as well have this at the start of the second leg so that we know what we should work on. You can make the argument that we were rusty but as professionals, you’re expected to turn up and adjust. Sometimes it can take you a game, I hope not two, to get into the tournament, you have to stay with the eight-ball, if you’re not, the other teams will be all over you,” he added.

RCB are currently third in the points table with 10 points from eight games after Chennai Super Kings and Delhi Capitals.