The battle between the two Royals went in favour of the Royal Challengers Bangalore for the second time in this season. It was AB de Villiers who furiously went after the Rajasthan Royals bowlers as Royal Challengers Bangalore chased down the target with two balls to spare taking RCB to 12 points in the points table. We also witnessed Robin Uthappa coming back in form after a series of low scores.

Rajasthan Royals skipper Steve Smith won the toss and elected to bat first at the Dubai International Cricket Stadium. The Rajasthan Royals side didn’t have any changes to their side but made changes within their playing XI as Robin Uthappa and Ben Stokes were all set to be Rajasthan Royals’ 5th opening pair of the season.

As the match began we witnessed the experienced Robin Uthappa open the batting and take on the charge. He hit Washington Sundar for four fours in one over to get things going. With the way, Robin Uthappa was going it did seem like he has got his mojo back which was missing since the start.

This was also the first time Robin Uthappa was opening the innings for Rajasthan Royals as we had only seen him bat down the order at 4 and below where he could hardly get the scoreboard moving.

But today it was Robin Uthappa’s day as he got the opportunity to open the innings and further went on to score a knock of 41 runs which indefinitely helped Rajasthan Royals to put up a target of 177 runs on the board which in the end wasn’t enough as Royal Challengers Bangalore chased down the target with two balls to spare.

The return of Robin Uthappa did take Twitter by a storm as people made a bank of memes on Rajasthan Royals sixth loss of the season. Which is why to let’s take a look at some of the memes that surfaced on social media.

Let’s take a look at some of the memes that surfaced on social media: 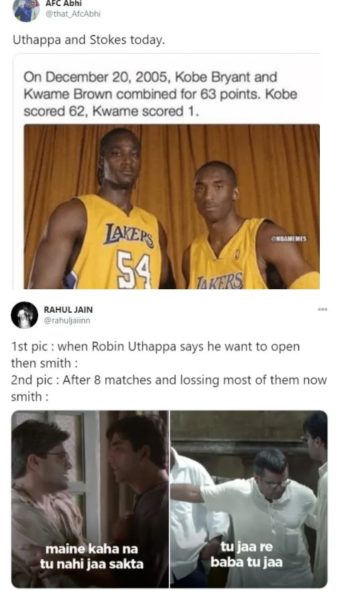 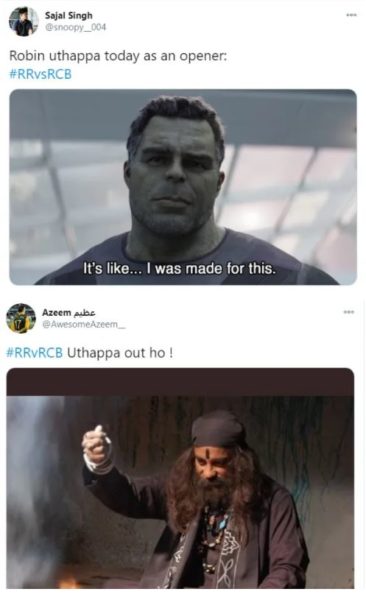