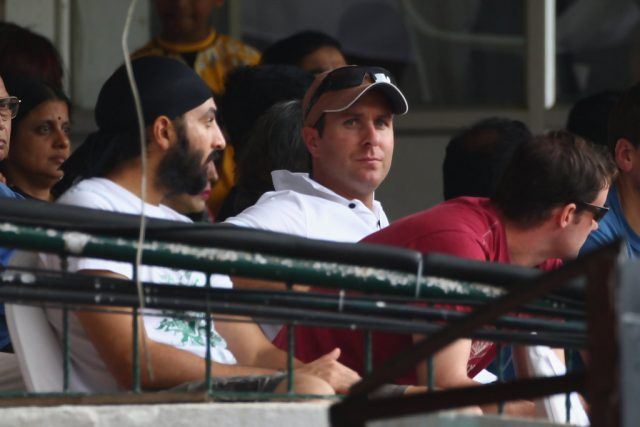 Michael Vaughan is amongst those accused by Azeem Rafiq of racial discrimination during his stint with the Yorkshire County Cricket Club. Rafiq revealed that Vaughan used words like “you lot” to discriminate racially against him. Meanwhile, the ECB CEO Tom Harrison has expressed his concerns over the Rafiq racism row. He said that the last few weeks has been tough for him comparing the controversy to that of an earthquake.

“The last few weeks have been very, very tough for cricket. It feels like an earthquake has hit us. The most damning part of Azeem’s testimony is that he didn’t want his son to be part of the game. That is, for someone in my job, the most difficult thing you can hear” he said.

For his involvement in the racism controversy, Michael Vaughan has also been excluded from the Ashes 2022 commentary team. Feeling dejected and disheartened about it, Vaughan has also issued a statement.

Disappointed To Be Not Commentating In Ashes: Michael Vaughan

“Very disappointed not to be commentating for TMS on the Ashes and will miss working with great colleagues & friends, but looking forward to being behind the mic for @foxcricket in Australia. The issues facing cricket are bigger than any individual case and I want to be part of the solution, listening, educating myself and helping to make it a more welcoming sport for all” he said.

Earlier, BBC released a statement to confirm that Vaughan would not be part of the team’s Ashes commentary panel as he was “involvement in the Yorkshire story represents a conflict of interest”. The statement read:

Former England captain Michael Vaughan will not be involved in the BBC's coverage of the Ashes in Australia.

He will also not be involved in the BBC's "wider coverage of the sport at the moment".

“While he is involved in a significant story in cricket, for editorial reasons we do not believe that it would be appropriate for Michael Vaughan to have a role in our Ashes team or wider coverage of the sport at the moment. We require our contributors to talk about relevant topics and his involvement in the Yorkshire story represents a conflict of interest.”

The much-awaited Ashes series will begin on December 8 at the Gabba.