MS Dhoni’s wife Sakshi celebrated her 32nd birthday yesterday as they were snapped together on the streets of Dubai. The Indian skipper is on a family outing in Dubai after the end of IPL 2020. Dhoni having retired from international cricket has all the time in the world now for his wife Sakshi. Meanwhile, former Pakistan skipper Shoaib Malik and his wife Sania Mirza joined them in. They also celebrated Sakshi’s birthday together.

Initially, the former India cricketer returned to India with the entire Chennai Super Kings squad after they bowed out of IPL 2020. He was even seen attending a gym session in Ranchi – his hometown. A week later MS Dhoni has now once again travelled to UAE to spend time with his family. 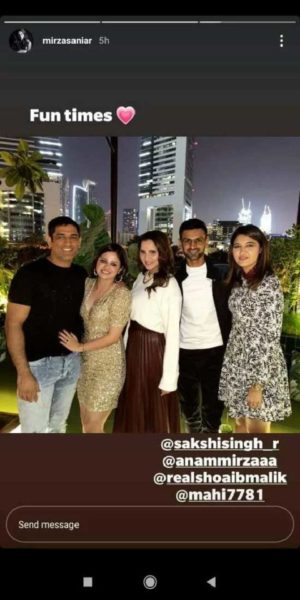 Meanwhile, MS Dhoni confirmed that he will be playing another IPL season with CSK in their last IPL game this year. Meanwhile, various cricket experts have been opining on what went wrong with Dhoni and CSK this season.

One of those experts includes former Indian opener Aakash Chopra who said that CSK should release the former Indian skipper if there is a mega auction ahead of the next season.

“I think CSK should release MS Dhoni going into the mega auction, if there is a mega auction then you will be with that player for three years. But will Dhoni stay with you for three years? I am not saying don’t keep Dhoni, he will play the next IPL, but if you keep him as a retained player but you will have to pay Rs 15 crore,” said Chopra in a video posted on his Facebook account.

Aakash Chopra further said that CSK should leave out Ambati Rayudu, Murali Vijay and Kedar Jadhav before heading into the next IPL season. All three of them did not have a good outing in the latest edition of the cash-rich tournament.

“I think this team should say goodbye to Kedar Jadhav. And I won’t be surprised if they discontinue with Murali Vijay as well,” said Chopra in a video on his official Facebook page.