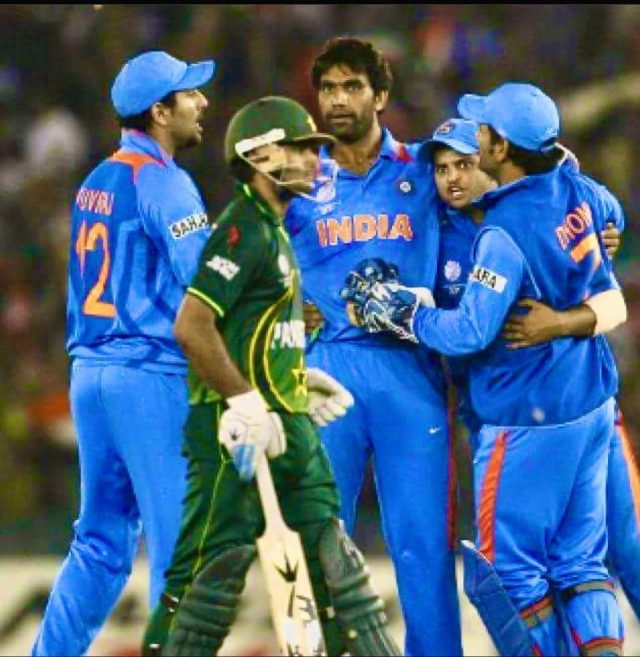 India had set a target for 261 against Pakistan in the semifinals of the ICC 2011 World Cup. Mohammed Hafeez got Pakistan off to a great start, as the opener was batting on 43 in 58 balls. The Indian team were in a spot of bother. Pacer Munaf Patel provided much-needed relief for his team as he dismissed the well-set Mohammed Hafeez.

Hafeez tried to paddle sweep against a length delivery outside off, but the ball took the bat’s edge. Wicket Keeper MS Dhoni made no mistake behind the stumps to end Hafeez’s stay at the crease.

On Friday, Former India Pacer Munaf Patel took to Social Media to share a photograph from the semifinals and captioned it as “Who all know this moment???

A fan replied to the post asking Munaf what he said to hafeez after the dismissal, “Hahaha Sir . Remember I asked u about this dismissal. U didn’t tell what exactly u said to hafeez.”

“I thanked Hafeez for giving me wicket.”

I thanked Hafeez for giving me wicket

India won the semifinals against Pakistan by 29 runs and booked a slot in the finals, which they eventually won. This was India’s second 50 over World Cup Championship win, the first being the 1983 World Cup, under Kapil Dev.

Pacer Munaf Patel played a key role in India’s winning campaign. He was the third-highest wicket-taker (11 wickets in 8 matches) for the team after Zaheer Khan and Yuvraj Singh. His best figures of 4 four 48 came against Bangladesh in the opening match of the ICC 2011 World Cup at the Sher-e-Bangla National Stadium in Dhaka.