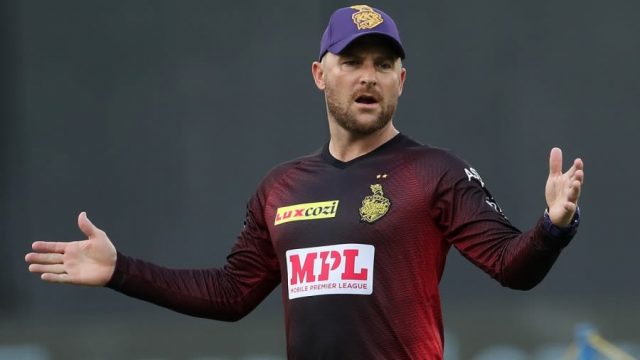 Kolkata Knight Riders (KKR) head coach Brendon McCullum has opened up on the horrific experiences of the first half of IPL 2021, which was postponed on May 4. The decision came after a couple of cricketers tested COVID-19 positive along with some support staff.

Meanwhile, it was KKR spinner Varun Chakravarthy and seamer Sandeep Warrier, who first tested positive for COVID-19 in May in the middle of IPL 2021. Moreover, the two-time champions also didn’t had a great outing where they managed to win only two matches from seven outings.

Speaking to the KKR website, Brendon McCullum highlighted that there was a sense of fear throughout the campaign in India. However, McCullum is hopeful for a strong showing when action resumes from September 19 in the UAE.

“In regards to the tournament which is upcoming (second half of the IPL phase), we can end it right. We can take the game on and we’re in a situation where we need things to go our way,” McCullum said.

“We need to hit the ground running, challenge one another privately, support one another publicly and try and get the best out of one another in the next 4-5 weeks. Who knows where we can go with this. There were sometimes throughout the season when I just felt we were being paralysed a little bit by fear,” he added.

"I'm also Emotionally attached to KKR because it changed my life. I think back to that first ever IPL game, my life changed that night. And that was because of the opportunities given by KKR." – Brendon McCullum

Talking about the pattern of his coaching, Brendon McCullum state that his aim is to build something at KKR which will last longer than his stint with the franchise.

“When we left India (after IPL was called off due to Covid), I think everyone understood me as a coach on how I want our team to play.

“I am unapologetic about that as well because my job is to try and build something at KKR that is going to last far longer than I am going to last for the franchise,” McCullum signed off.