Pat Cummins is currently in quarantine and will begin his outdoor training in a few days with his Kolkata Knight Riders teammates. While he currently has a lot of free time while stuck in his hotel room, Cummins decided to do a fun Q&A session with all his fans on Instagram. The Aussie fast bowler received plenty of interesting questions from fans and he tried to answer the majority of them. One question that Cummins would have not loved answering was when a fan asked his reasons for his side’s loss at the Gabba in Brisbane against India earlier this year.

The young India team defied all odds and breached the fortress of Australia and won the Test series by 2-1 at the ‘Gabba’. Apart from Cummins, no other Aussie fast bowler could pick wickets on the final day as India courtesy of Rishabh Pant, Shubman Gill and Cheteshwar Pujara chased down the target of over 300 on the final day. It was heartbreak for Australia as they lost at the Gabba after countless years and the line said by captain Tim Paine, ‘Come to gabba’ in the third Test didn’t age well.

Ahead of IPL 2021, Cummins was once again reminded of his side’s loss at the gabba by a fan on Instagram. When asked reasons for the loss Cummins came up with a witty reply that won several hearts on social media. Cummins posted a photo while wearing specs and an innocent face and wrote, “India got more runs”. 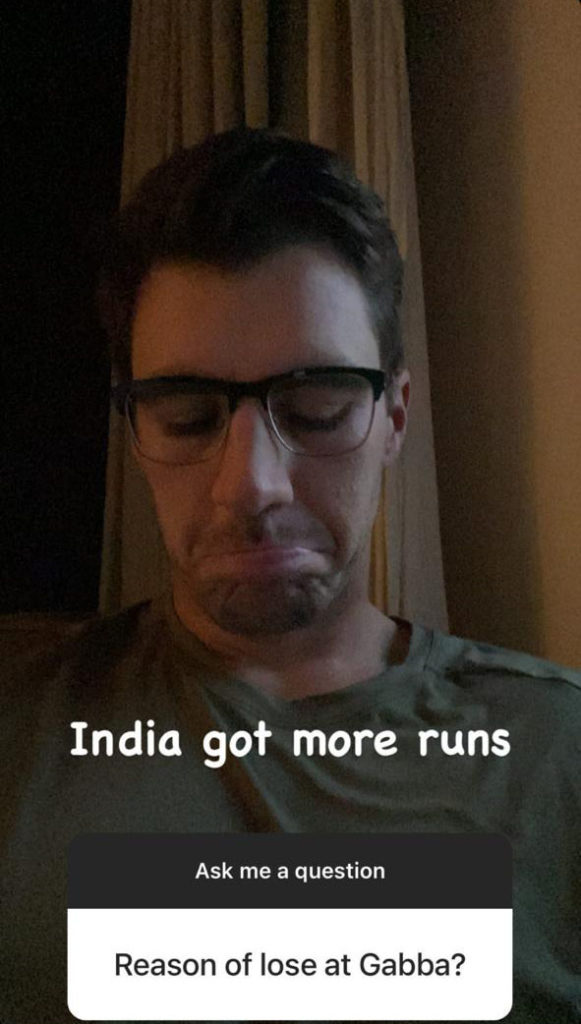 Meanwhile, Cummins is now all focused on the upcoming IPL 2021 where he will once again don the purple and gold for Kolkata Knight Riders. The great fast bowler will be looking to make a statement and show his prowess in the biggest T20 league in the world. KKR will kick off their IPL season against Sunrisers Hyderabad on April 11.

Also Read: Aakash Chopra Explains How KKR Should Use Pat Cummins In IPL 2021