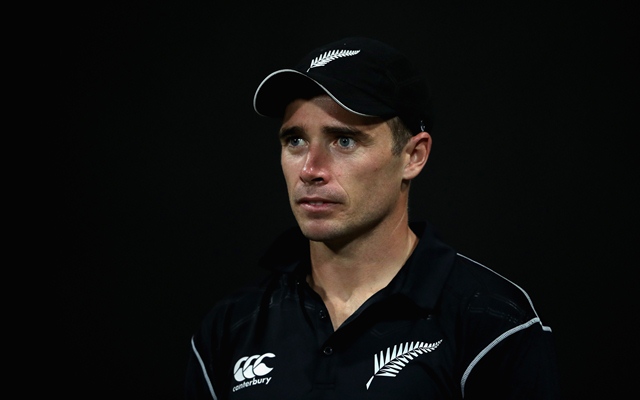 New Zealand just had a year of enthralling cricket which saw them win the World Test Championship and reach the final of the T20 World Cup. Even after winning Test Cricket’s ultimate trophy, veteran fast bowler Tim Southee is keen to improve on the part New Zealand have struggled in the last few years.

In their latest series, the Black Caps got beaten by India even after surviving a thrilling Test in Kanpur which ended in a draw. Speaking at an event organized by Amazon Prime video, Southee stressed the importance of winning Test matches on overseas soil.

“As a side, we are continuing to look to get better and grow as a team. I think performing overseas is one thing. In international cricket now, winning away from home is becoming so hard, especially in Test cricket. As a side, that’s an area we hopefully can improve on. We’ve had a little bit of success overseas over the years but that’s somewhere we would like to improve,” said Tim Southee.

Sitting alongside Tim Southee, the New Zealand skipper Kane Williamson also reflected on the busy schedule that they had to endure during the year and the schedule they have in the future.

He also reflected on the ups and downs saying it was a learning curve and spoke about the challenges that lie ahead.

“I suppose with Covid, there’s been a lot of major cricket in one year. The World Test Championship and then the T20 World Cup. As soon as something finishes, another thing starts. That’s the focus when you’re directly involved in the sport. There’s another T20 World Cup (in 2022) that’s not too far away. There seems to be a lot of cricket (coming up),” said Kane Williamson

“As a side, over the periods of time, we’ve had players come and go and we always try to navigate those challenges each time and move in the right direction. Throughout this year, as a group, we saw a lot of good signs and saw a lot of good days and a lot of tough ones as well; where we saw them as the best opportunity to learn. It’s great that in some major events, we could go out there and play some really good cricket. But we know that the challenges that lie here and preparing for,” he concluded.

New Zealand will lock horns with Bangladesh in their next series starting from January 1 in 2022.