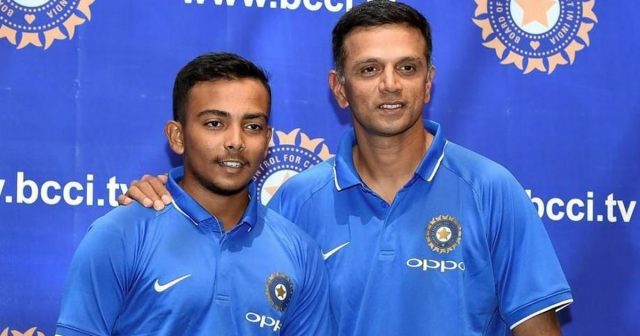 Opening batsman Prithvi Shaw was a known figure even before he made his Domestic debut. Shaw first shot to fame when he scored 546 off 330 balls playing in the Harris Shield tournament. He has had a speedy rise from domestic to international cricket. But the youngster has already experienced several ups and downs in his career.

Shaw’s career was dealt with a major blow in 2019, when he was banned for violation of doping rules. He consumed a cough syrup without knowing that it contains a banned substance. After his ban ended, Shaw made comeback in the Indian team for the New Zealand tour in early 2020.

Recalling the incident Shaw revealed that former cricketer Rahul Dravid motivated him during the challenging times.

“On A tours, I did speak to him. When I got banned for doping, he (Dravid) called and said, This is part of life. It’s ok. It wasn’t my fault and I will come back stronger.” It felt really nice that he talked to me even during my bad phase,” Shaw told Indian Express.

Recently, Prithvi Shaw was dropped from the Indian Test team after the Australia series. But the opener made a remarkable comeback by scoring tons of runs in domestic cricket for Mumbai.