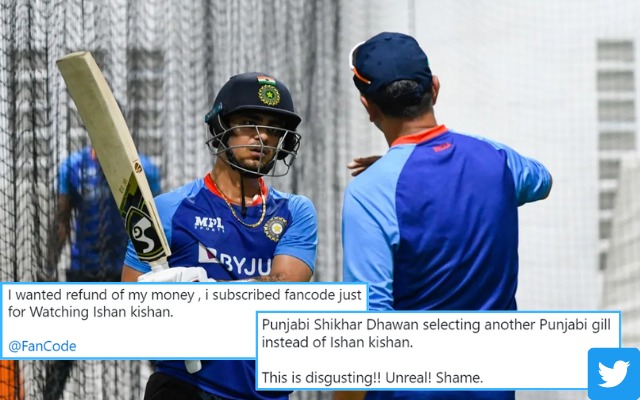 Wicket-keeper batter Ishan Kishan has been excluded from India’s playing XI for the first ODI against West Indies on Friday, July 22 at the Queens Park Oval, Port of Spain in Trinidad. Shubman Gill has made the cut to the team ahead of Ishan and Ruturaj Gaikwad. Some fans were disappointed with the decision to exclude the wicket-keeper batter.

Ishan Kishan was part of the Indian team on the recently concluded tour of England. He played the first T20I game, scoring eight runs in ten deliveries. The 24-year-old did not get an opportunity after the match, as the senior Indian players returned back to the team. The left-handed batter was likely to open the innings in the first ODI against West Indies on Friday. However, in a slightly surprising decision, India went ahead with Shubman Gill.

A look at our Playing XI for the 1st ODI.

In his short international career so far, Ishan Kishan has only played three ODIs and 18 T20Is. This year, he played a solitary one-day match against West Indies at Ahmedabad in February. Ishan managed just 28 runs in the match. So far, he has had a decent year for India in international cricket. He was the leading run-scorer earlier this year against South Africa in T20Is.

Let’s take a look at how Twitteratti reacted to Ishan Kishan’s exclusion:

I wanted refund of my money , i subscribed fancode just for Watching Ishan kishan. @FanCode

Was interested to watching his Wicket keeping in Internationals 😒

Only Surya masterclass can force me to watch the match…

Someone plz DM me when Surya comes to bat

How Sanju sneaked ahead of Ishan 🤭

Shit Selection , All the 3 Pacers are attacking and are not economical. Also 10 overs from Shardul can be regretfull. No Ishan Kishan Too#INDvWI #WIvIND

Ishan definitely should be in the playing11. But ipl kids want sanju Samson to play… #ishankishan pic.twitter.com/ztgSkeToHU

I think India will be lost today
I don't know which types of politics is going on with Ishan Kishan @ishankishan51
Why he is not in today playing 11?@BCCI @SDhawan25 @SGanguly99 @JayShah

Unfair on Ishan Kishan he was there in the ODI squad vs England ahead of Samson and Gill and now he is benched.

This is disgusting!! Unreal! Shame.

The Indian team has got off to a great start batting first at the Queens Park Oval against West Indies on Friday. Skipper Shikhar Dhawan and his opening partner Shubman Gill scored 73 runs in the 10-over powerplay to set the stage. They put together a 119 runs stand for the first wicket before the latter was dismissed.

Shubman Gill was run-out by Nicholas Pooran for 64 runs off 53 deliveries. His knock included six boundaries and a couple of sixes and came at a strike rate of 120.75. On the other hand, Shikhar Dhawan is unbeaten on 50 runs with Shreyas Iyer walking in at number three for India.