Former India skipper MS Dhoni is celebrating his 41st birthday on Thursday, 7th July, in England. Dhoni’s wife Sakshi shared a video from the birthday party, on her Instagram profile. Dhoni’s family and friends were part of the get-together.

In the comments section of Sakshi’s post, Punjabi singer Guru Randhawa and Bollywood Actor Ranveer Singh gave their best wishes for ‘Captain Cool’. MS Dhoni and Sakshi have been in the UK since past few days. The couple celebrated their 12th wedding anniversary, on 4th July, in England itself.

Sakshi also shared a group photograph on her Instagram story from the birthday party. The fans were quick to notice Team India wicketkeeper Rishabh Pant in the picture. 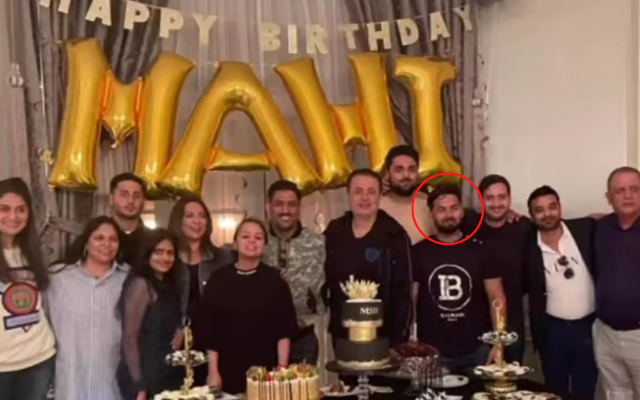 Pant recently gave a magnificent performance in the 5th Test match against England, played at Edgbaston. In the latest ICC Men’s Test Batters Rankings, Pant has moved to the 5th spot and is currently the highest-ranked Indian batter. He will be next seen in action during the 2nd and 3rd match of the T20I series against England.

Rishabh Pant’s improvement as a wicketkeeper has been remarkable, just like Dhoni- Sanjay Manjrekar

Pant has time and again called MS Dhoni his idol. Recently, Commentator Sanjay Manjrekar had also compared Rishabh Pant’s growth as a wicketkeeper to that of Dhoni. While speaking on Sony Sports, he said: “He [Pant] has taken the job [wicketkeeping] very seriously, and his improvement has been remarkable, just like Dhoni. How he sort of improved as a keeper. I loved his commitment because you can take this job a little easy while being so successful as a batter. It’s strikingly brilliant.”

Meanwhile, ahead of his birthday, MS Dhoni was spotted watching the Wimbledon Quarter-Final between Rafael Nadal and Taylor Fritz.