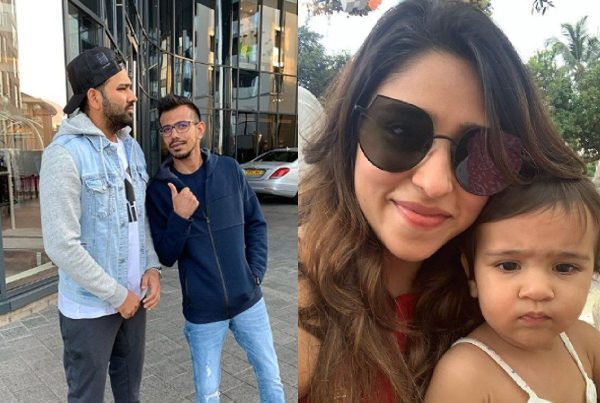 Batting veteran Rohit Sharma turned 34 on Friday. The India opener, who is currently leading Indian Premier League (IPL) franchise Mumbai Indians, was showered with wishes on his birthday from all the corners of the world.

Among his former and current colleagues, the likes of Yuzvendra Chahal, Kuldeep Yadav, Shikhar Dhawan, Harbhajan Singh, Suresh Raina poured in wishes on his special day. It was leg-spinner Yuzvendra Chahal, whose wish made the eyeballs rolls. The spinner is quite active on social media sites and shares humorous posts and comments frequently. The 30-year-old again proved his satirical side with his “romantic” birthday wish.

“Love of my life Happy Birthday Rohitaaaa Sharaaamaaaa.” While the fans found the post hilarious, it was Rohit’s wife Ritika Sajdeh who played the last card and won the match. Ritika replied by saying, “Your post is more romantic than mine”.

While Ritika Sajdeh too shared a romantic post to wish her beloved husband on his special day. Sharing a picture of Rohit lying on their daughter Samaira’s lap, Ritika wrote, “Happiest birthday Ro You’ll always be the best thing to ever happen to us. I can truly say the world is a better place with you in it.”

Yuzvendra Chahal and Rohit Sharma share a great bond on and off the field, the duo has often seen commenting funny things on each other’s pictures and posts. Right Now, Chahal is representing his IPL franchise Royal Challengers Bangalore. Their teams crossed swords in the season opener, where RCB triumphed over the title defenders.

RCB played their seventh game on Friday against Punjab Kings. RCB lost the fixture by 34 runs making it their second defeat in the tournament. Geared up to field first, RCB conceded 179 runs for five wickets. In response, Virat Kohli and co could touch the 145-mark losing eight wickets.

Rohit’s Mumbai Indian will face off their nemesis MS Dhoni’s Chennai Super Kings on Saturday, May 1, at the Arun Jaitley Stadium in New Delhi.