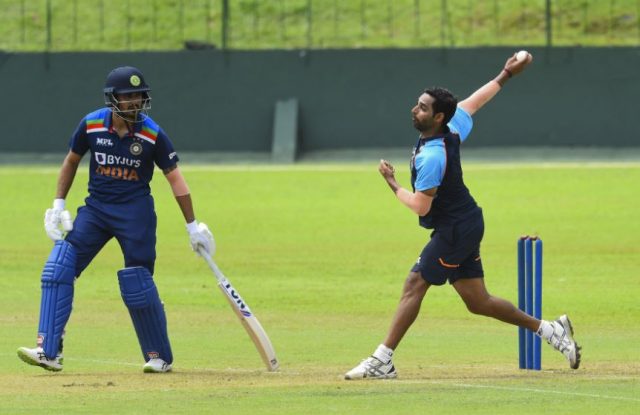 The Indian team in Sri Lanka battled it out in an intra-squad match ahead of their white-ball series against Sri Lanka. The matches are set to start from July 13 with the ODI series followed by the T20I series.

The players recently got out of their quarantine, and warmed up with fun outdoor activities. They headed off to the training grounds soon. And in the latest pictures posted by the BCCI, the team played an intra squad match in Colombo.

Board of Control for Cricket in India shared the pictures from the outing, with Shikhar Dhawan, Bhuvneshwar Kumar, Manish Pandey and Ruturaj Gaikwad seen in action. Also participating was keeper Ishan Kishan, who was seen focused behind the stumps. He is likely to be the first-choice keeper in the limited-overs series. While the official scores are yet to be released, it was some much needed practice for the youngsters. The tweet, posted on BCCI’s official handle, was captioned:

A productive day in the field for #TeamIndia during their T20 intra squad game in Colombo 👌 👌#SLvIND pic.twitter.com/YLbUYyTAkf

Schedule for the white-ball series against Sri Lanka

While the Test team is holed up in England, the secondary side led by skipper Shikhar Dhawan will face-off against Sri Lanka in a 3 match ODI series followed by as many T20I’s.

Although the Indian team is filled with inexperienced players, the team still looks strong on paper. This can be attributed to India’s domestic structure and the IPL in particular. It has paved the way for an innovative idea of having two tours simultaneously during bio-bubble times.