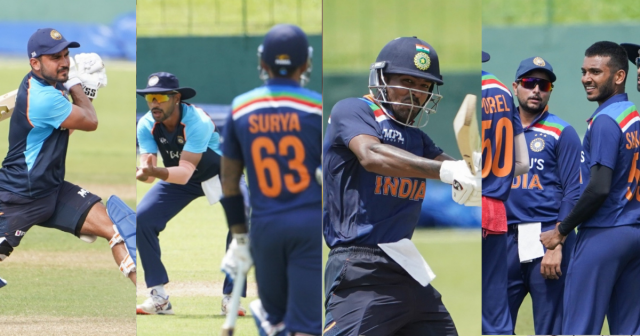 Indian team is practicing hard before the limited-overs series against Sri Lanka starts. The Shikhar Dhawan-led side was seen playing Intrasquad warm-up games before heading into the main series.

BCCI captioned the tweet: “A good day in the field as #TeamIndia play their 2nd intra-squad game in Colombo.”

📸 📸: A good day in the field as #TeamIndia play their 2⃣nd intra-squad game in Colombo 👌 👌#SLvIND pic.twitter.com/Fiyk8poKXw

Mumbai Indians star batsman Suryakumar Yadav said that he is excited to play under coach Rahul Dravid. He also said he has heard Dravid always remain cool and calm under the toughest situation in cricket.

“It is a great opportunity for everyone to have a tour amidst this situation (COVID-19 pandemic). It is a great challenge and responsibility for everyone to come out here and express themselves. The great thing is having Rahul sir around, we have heard a lot about him. This is my first tour with him but I have heard from many players that Rahul sir is very calm and composed when it comes to this role. I am very excited and looking forward to it,” said Surya in a virtual press conference on Tuesday

India will face off against Sri Lanka in the three ODI and as many as the T20I series which will begin on 13 July. Team India has a great mixture of young and experienced campaigners. Also, the team contains as many as 6 uncapped Indians who might get the opportunity to debut against Sri Lanka.

Shikhar Dhawan XI faced off against Bhuvneshwar Kumar XI. Dhawan won the toss and invited team Bhuvneshwar to bowl first and put 154 runs on the board. The star performer from Dhawan’s team was Ruturaj Gaikwad who scored 30 odd runs. However, Manish Pandey batted even better scoring 63 runs for the team. Also, Bhuvneshwar Kumar delivered a beautiful spell of 2/23 in four overs.

When Bhuvneshwar Kumar XI came to bat they were provided a great start by young Prithvi Shaw and Devdutt Padikkal. The openers managed to build a 60 run partnership. However, Suryakumar Yadav’s half-century helped Bhuvi and Co. to chase the target comfortably in 17 overs.

“The two nominated captains from today’s game were Shikhar Dhawan and Bhuvneshwar Kumar. Shikhar won the toss and elected to bat first. His team managed to score 150-odd in the allotted 20 overs. There were useful contributions from Ruturaj, who scored 30-odd runs, and Manish Pandey, the highest scorer with 63. It was a very hot day, a hard day, and everyone appreciated Manish for his contribution,” Mhambrey said.

The recap with a twist 🔀

“Bhuvi’s (Bhuvneshwar) team could manage to chase that easily in the 17th over, with Suryakumar who got fifty-plus. There were a couple of useful contributions from Devdutt and Prithvi Shaw as well, putting up a 60-run opening partnership,” he added.