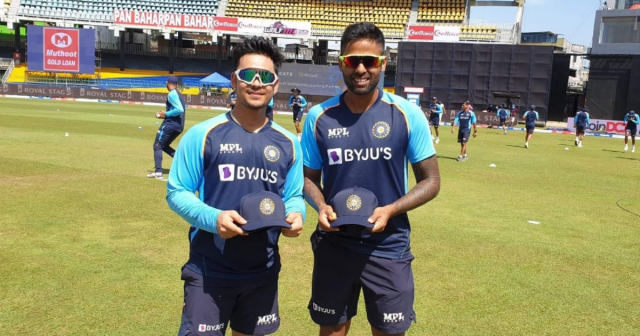 Birthday boy Ishan Kishan opened the innings for India in his first T20I game. The 23-year-old smashed 56 runs off just 32 balls. However, he was able to play only 2 games before getting ruled out due to an injury. Meanwhile, Suryakumar Yadav made his debut in the same match where his Mumbai mate made his debut but he didn’t bat.

However, in the second match, Suryakumar smashed 57 runs off just 31 deliveries batting at no.3. Also so far the 30-year-old has represented India in 3 T20Is batting in 2 innings.

Sanju Samson left out of Team India with a sprained ankle

Notably, the much-awaited spin duo of Kuldeep and Chahal is back. The duo was not seen together since 2019. Once considered the best bowling pair of India ‘Kul-Cha’ were dropped from the team after a poor run. However, Yuzi and Kuldeep played for India between that time but they weren’t seen playing together.
Also, wicketkeeper-batsman Sanju Samson was not selected in the 1st ODI match. The reason behind Sanju’s absence is sprained ligament in his knee.