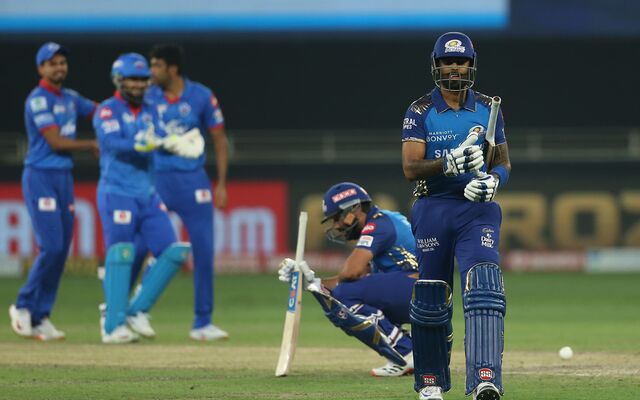 The 2020 IPL Final is underway between Mumbai Indians and Delhi Capitals at the Dubai International Cricket Stadium as Mumbai Indians are in a comfortable position to lift the coveted title for the fifth time in IPL history. In between the exciting final, we witnessed a horrible mix up between Mumbai duo Rohit Sharma and Suryakumar Yadav which resulted in Surya sacrificing his wicket for his skipper.

Talking about the match, Delhi Capitals after winning the toss elected to bat first at the Dubai International Cricket Stadium where they posted a total of 156/7 at the end of 20 overs with the help of a 100 run partnership between skipper Shreyas Iyer and Rishabh Pant. In return Mumbai openers just took down the Delhi bowlers from head to toe as at one point it felt like Mumbai would chase this total down in less than 15 overs time.

In between the terrific chase, during the 11th over when Ravichandran Ashwin was bowling to Rohit Sharma, that is when Rohit pushed one straight down the throat of Praveen Dubey who was placed at covers. Rohit seized the opportunity to steal a quick single, only to find his partner Suryakumar Yadav seemingly not interested in taking that single. In the end, Surya was the man with the big heart as he ended up sacrificing his wicket for his skipper.

Surya without showing any hint of emotion on his face walked back to the pavilion as he was dismissed in a very unfortunate way, the dismissal ended Suryakumar Yadav’s 2020 IPL campaign as he finished with 480 runs at an average of 40 which includes four valuable fifties.

Also Read: Rohit Sharma Gets Register Another Mieleston In Final Vs Delhi Capitals

Meanwhile, the dismissal didn’t cost much as Mumbai Indians cruised through to their fifth IPL title convincingly with five wickets in hand.