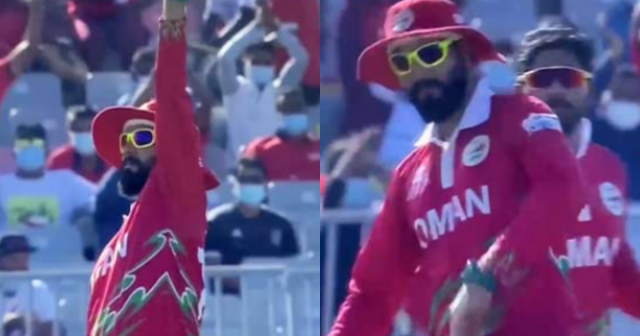 The T20 World Cup is back after a 5-year break, and fans were treated with some great entertainment on day 1 itself. The first match featured Oman and Papua New Guinea. Oman playing at their home ground, got off to a flying start by winning the toss and taking two wickets without letting their opposition score a run.

After a poor start, captain Assad Vala and Charles Amin added 81 runs for the third wicket before Charles lost his wicket to an unfortunate run-out.In the 15th over, Oman’s lead pacer Kaleemullah returned to the attack, and it just took him one ball to force a false shot from the PNG skipper, Assad Vala.
With the death overs approaching, Asad tried to accelerate but mistimed the ball and Jatinder Singh completed a superb catch running in from long-on. While everyone enjoyed seeing the effort from the fielder, it was the celebration after the catch, that attracted more eyeballs. Jatinder replicated Indian opener Shikhar Dhawan‘s iconic ‘thigh-five’ celebration, providing everyone with a great moment to remember.

Is that Jatinder or Dhawan? 😍 pic.twitter.com/2dxxOVr56V

Oman defeated Papua New Guinea by 10 wickets in the T20 World Cup 2021 opener. With four wickets, Zeeshan Maqsood was the standout performer for Oman. In the 16th over, he got 3 wickets which stopped PNG from reaching a good total. He was adjudged “Man of the match” for his performance. Bilal Khan and Kaleemullah also got two wickets each.

As far as the batting of Oman is concerned, their openers were clinical.Aqib Ilyas scored 50 and Ludhiana-born Jatinder Singh, 73 runs.Both of them remained unbeaten till the end of the run chase.

Jatinder Singh’s Total Match Impact of +38 today is the highest figure for a non-ICC full member side in T20 World Cup history.#T20WorldCup #OMAvPNG

Papua New Guinea would like to improve their performance in the upcoming games, in order to qualify for the super 12 round. Next, PNG will face Scotland on Tuesday and Oman will play against Bangladesh on the same day.