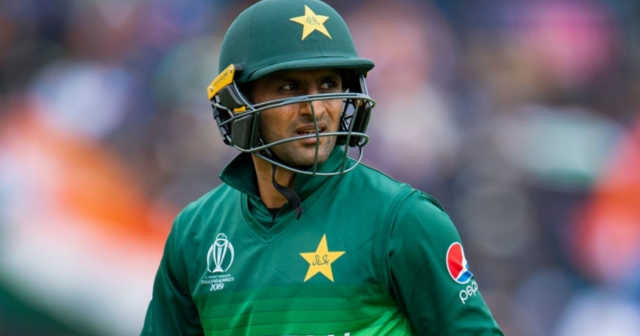 “This man who has witnessed four decades in the world of cricket. The world has changed, but Shoaib Malik has remained unchanged,” the anchor of Pakistani News Channel-Samaa TV, began the program by these lines on Saturday evening. This was in the aftermath of PCB’s announcement that the 39-year old Shoaib will replace injured Sohaib Maqsood in the Pakistan T20 World Cup 2021 squad.

Shoaib made his international debut for Pakistan in October 1999 against West Indies. It has been 22 years since, and Shoaib continues to play international cricket in the T20 format. He was the captain of the side that played the finals against India in the 2007 T20 World Cup. He was also a part of the Pakistan team when they won the T20 World Cup in 2009 under the captaincy of Younis Khan.

While his inclusion in the T20 World Cup squad evoked mixed reactions in the online world, Samaa TV decided to give a tribute to Shoaib’s long career in, what seemed to be a sarcastic report. The channel displayed various video clips and discussed the global changes that have taken place during Malik’s career.

The narrator hilariously describes how the price of petrol, mobile phones, the online world and various other things in the world have changed but Shoaib Malik playing cricket has remained constant. The video ended with another hilarious comparison in which the narrator explains how the left-arm pacer Shaheen Shah Afridi has grown up watching Shoaib Malik and has now even played alongside him, but Shoaib is still present “on the crease”.

The other day in Pakistan’s National T20 Cup, another hilarious incident occurred involving Shoaib Malik. During the game, when the commentators were discussing about the long and illustrious career of Shoaib, commentator Tariq Saeed used a hilarious Hindi sentence to describe the veteran. He said, “Darzi jab tak jiyega… Tab tak siyega (as long as the tailor lives, the tailor will sew)”.

The entire commentary box couldn’t stop themselves from laughing after this entertaining line. Tariq also received high praise for his witty commentary style, on social media.