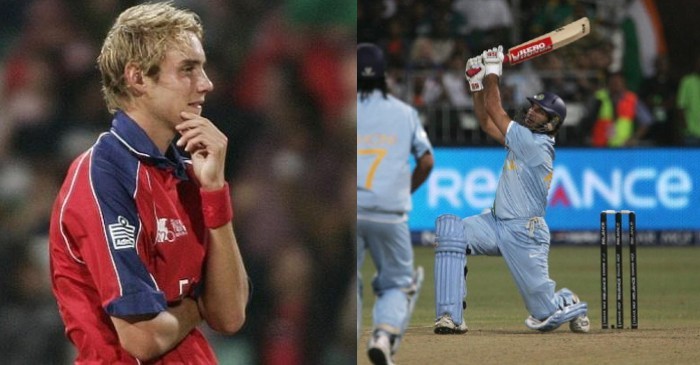 The game of cricket is known for a high voltage battle between bat and ball on the field. The batsmen always put big runs on the board to help their team get ahead in the match. Meanwhile, it’s the responsibility of bowlers to get crucial breakthroughs in regular intervals so that their teams remain in a dominant position throughout the game.

Other than the amazing battle between bat and ball, several times players have been seen involved in verbal fights. Cricket history has seen various moments where big cricketers were seen engaged in a verbal brawl in the game. Also, sledging remains an integral part of cricket especially in the purest form of the game.

In this article, we will have a look at the top 7 Thug life moments in cricket caught on camera.

The India-Aussie rivalry is one of the most talked-about things in cricket. Both the teams are two of the best sides in the world and on the field they give everything to outshine each other. Meanwhile, During the third ODI of India’s 2016 tour of Australia all-rounder, James Faulkner tried to get under the skin of Virat Kohli. The two-star players were seen engaged in a verbal battle. James Faulkner challenged Kohli to make runs of his deliveries, to which Virat Kohli replied.

“You’re wasting your energy. There’s no point, I’ve smashed you enough in my life. Just go and bowl,”. However, Kohli scored a century in that match but Australia won the game.

Everyone knows how good speaking skills the current Indian Head Coach has. With the microphone in his hand, Ravi Shastri has given several memorable moments to cricket fans. Meanwhile, coming back to his banter with the Australian Mike Whitney, which took place during India’s 1991/92 tour of Australia.

Ravi Shastri opened the innings for India and Australia’s pacer Mike Whitney was on the field as a substitute. Ravi Shastri smashed the ball and tried taking a single. Meanwhile, looking at this Whitney said – “Stay in your crease or I’ll break your fucking head.” just to get a savage reply from Shastri. As Ravi Shastri replied: “If you could bowl as well as you talk, you wouldn’t be the fucking 12th man!”

The Australia-England Ashes rivalry is undoubtedly the biggest rivalry in Test cricket history. The marquee Ashes has witnessed several exceptional encounters alongside some epic banters.

When England’s debutant Jimmy Ormond came to bat, Mark Waugh had some words ready for him. As Mark Waugh said: “Look who it is. Mate, what are you doing out here? There’s no way you’re good enough to play for England,”. Then Ormond came up with a savage response as he said: “Maybe not, but at least I’m the best player in my family.” Notably, this was directed towards Mark’s brother, referring to Steve Waugh as a better player than Mark. It was definitely a thug life moment.

Australia vs India Border Gavaskar Trophy 2020/21 was one of the most iconic Test series in the history of cricket. Against all the odds India managed to clinch the victory in the series under the leadership of Ajinkya Rahane. Meanwhile, in the third Test match of the series, India was on the verge of losing the series. Hanuma Vihari and Ravichandran Ashwin joined the forces and they did everything they could to protect their wicket against a strong Australian bowling unit.

During India’s blockathon show Australian skipper Tim Paine tried to get under the skin of Ashwin and he said: “Can’t wait to take you to Gabba, Ash”. Indicating the venue of the fourth Test match. Meanwhile, Ashwin gave a savage reply, as he said: “Just like we wanna get you to India, maybe your last series.” Notably, India went on the draw that match. Also, they went on to breach the Gabba fortress to win the series.

India pacer Sreesanth is known for delivering fierce spells for the team. However, once he showed his batting skills by smashing a sixer to Andre Nel during the first Test of India’s 2007 tour of South Africa.

Notably, during India’s second innings Sreesanth came to bat at number 10 and Andre Nel said something to the Indian tailender after bowling a bouncer. This fired up Sreesanth and he smashed a straight six and was seen enjoying the moment.

The former Indian cricketer Yuvraj Singh who is also known as ‘Sixer King’ was in full mood to destroy the English bowling attack in the 2007 T20 World Cup. He created history by becoming the first-ever cricketer to smash six sixes in an over in T20 internationals. The bowler who became a victim of this carnage was star pacer Stuart Broad.

Ahead of 18th over Andrew Flintoff and Yuvraj Singh were involved in a heated exchange. This fired-up Indian all-rounder decided to go berserk against Stuart Broad. Yuvi smashed six big sixers to Stuart Broad and smashed a 12 ball half-century which is the fastest fifty by a cricketer in international cricket.

Ms. Dhoni is regarded as one of the most successful captains in the history of cricket. He is the only captain to win the Big 3 ICC trophies. Under Dhoni’s leadership, India won T20 World Cup, ODI World Cup, and Champions Trophy. After every failure of team India in international cricket Dhoni was asked about his retirement plans.

The same happened when India lost the semi-final against West Indies in T20 World Cup 2016. Journalist Samuel Ferris asked Dhoni about his future plans and Ms. Dhoni called the journalist on stage and had a clear talk with him.

Journalist: Do you think you can continue playing on after this tournament?

Then Dhoni proceeds to ask: You want me to retire?

Dhoni: I was hoping it was an Indian media guy because I can’t really say if you have a brother or a son who can play for India or is a wicketkeeper. But do you think I am unfit?

Dhoni: How is my running?

Dhoni: You think I can survive until the 2019 World Cup?

Dhoni: Then you’ve answered the question you fired the wrong ammunition at the wrong time.